Venture into the Mystical Island of Kaikala and help Kirm, a mute boy from the Makoa Tribe, overcome his rite of passage and leave his childhood behind. A #game for #Linux, Mac, Windows PC, Nintento Wii U, and OUYA.

Developed by Risin’ Goat for PC, Mac and Linux, A Rite from the Stars is a 3D point & click graphic #adventure in which you play as Kirm, a mute boy from the Makoa Tribe from The Mystical Island of Kaikala. Although every Makoa child must overcome a rite of passage to leave their childhood behind, Kirm’s one will be harder because he has been chosen by the Stars. In order to become not only a man, but a legend among his peers, he will have to master three paths: Wisdom, Courage and Spirit. Each path features a special mechanic and poses different kinds of challenges. 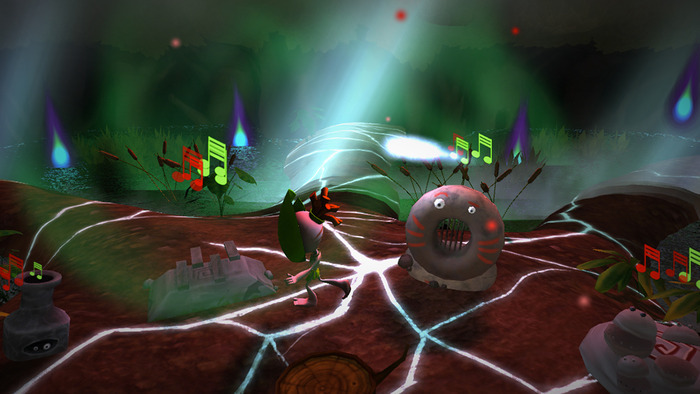 A Rite from the Stars is a 3D Point & Click adventure set in a paradisiacal yet dangerous environment: The Mystical Island of Kaikala.  Kirm, a mute kid from the Makoa Tribe, must overcome a rite of passage in order to leave his childhood behind. In fact, he has been chosen by the stars to become a legend among his peers. So his rite will not be ordinary… and it will definitely not be easy. In order to complete his quest, he will have to master three paths…

Every path is different. The environment, the challenges and even the gameplay will feature an unique approach in each path. And you (the player) may choose how to complete them! For example, you can start with Wisdom, advance a little and then switch to Spirit… or Courage… or continue with Wisdom. You decide.

Wisdom is, of course, about the mind. Kirm will go through an ancient temple full of traps. In this path, Kirm will be able to pick up items and carry them within each temple room. However, there’s no inventory, so he will only be able to carry one item at a time.

Courage is about the will. Kirm will have to get deep into Kaikala’s jungle in order to reach The Beast’s Cave, where his destiny awaits. In this path, Kirm will meet his power animal, a meerkat. The player will be able to control the two characters at the same time. Teamwork is essential!

Spirit is about the soul and its unknown ways. At some point, Kirm will gain the ability to enter into the spirit world, an alternative version of reality. He will have to use this power to reach the highest spot on the island: The Volcano’s Crater. Once there, he will have to seek a revelation from the Heavens.

A Rite From the Stars, will introduce some interesting and unique features in the gameplay to make the whole game experience fresh while also being true to its Point & Click nature. Keep the vision intact, so this project developed using Rising Goat’s own resources.

Want to know more, check out A Rite From the Stars on Kickstarter . Definitely take some time to check out the Demo above.

A Rite from the Stars puzzle adventure coming July 19th