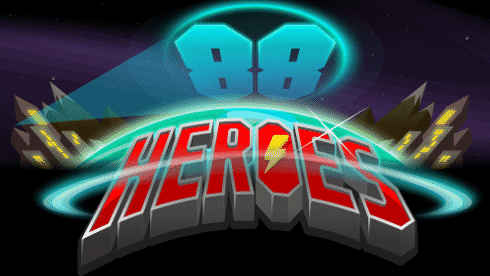 Rising Star Games today #announces a new partnership with acclaimed development studio Bitmap Bureau, to publish 88 Heroes on Linux, Mac, Windows PC, Mac, Linux, Xbox One and PlayStation4. Targeting a #releasedate of the 8 th day of the 8 th month (August 8 th 2016), Rising Star Games will be revealing a new hero each and every day for 88 days counting down to launch. The mighty assemblage begins today with Gonan, the muscle-bound warrior who wields the mighty blade of his 88 forefathers, which he uses to smash through walls and lay waste to enemies.

Rising Star Games and Bitmap Bureau are also excited to reveal that a global 88 Heroes ‘Design-A-Hero’ contest will begin very soon. Design your own fabulously mundane or magnificent champion complete with superpowers and title, and win the chance to see your creation appear in pixelated glory in the final game! Stay tuned for details on how to enter, coming soon.

88 Heroes is a chaotic 2D platformer that is as fun to watch as it is to play, where each level completed or untimely death brings a new uniquely skilled hero into the action. With just 88 minutes to complete all 88 levels, you’ll need every one of the 88 heroes to stop the dastardly Dr. H8 destroying the Earth! Are you up to the challenge?

“We’ve got at least 88 reasons why we’re so excited to be working with Bitmap Bureau on the release of 88 Heroes“, said Martin Defries, Managing Director of Rising Star Games. “Top of the list has to be the fast-paced and hectic, yet cunning and precise platforming gameplay, that is a genuine crowd-pleasing spectacle to behold and a thrill to play.”

“88 Heroes has been a labour of love for us at Bitmap Bureau, and is representative of the many years of 2D game development we have accumulated”, said Mike Tucker, Director at Bitmap Bureau. “It’s particularly exciting for us as it’s both our first console release and also the first time we’ve worked with Rising Star Games; a publisher with a great reputation in the industry”.

Follow the daily character reveals for 88 Heroes on Twitter to keep up to speed with the ever-growing assembly of super heroes and zeroes.

For more information on 88 Heroes , please visit the official site.