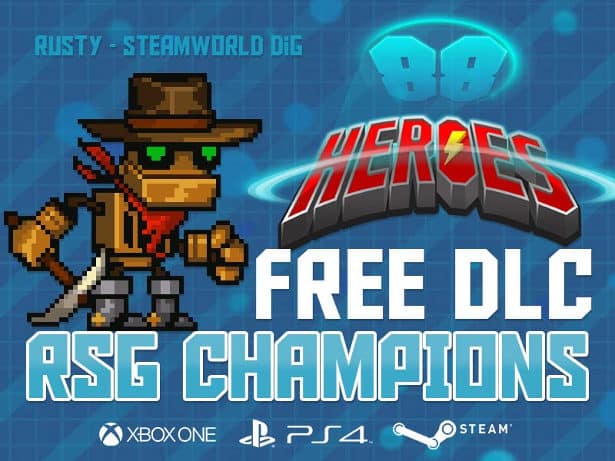 So right now, rising Star Games are announcing the first free pack of downloadable content for 88 Heroes. Since this is available now on Steam for Linux, Mac, Windows, PlayStation®4 and Xbox One. The free DLC pack, titled 88 Heroes: RSG Champions, is adds eight new heroes. All plucked from dimensions across the Rising Star Games universe. So eight heroes from games published by Rising Star Games enter the fray. While joining forces with the 88 heroes to foil Dr. H8’s nefarious plans.

Meet the Champions! The DLC heroes and their unique skills:

“We work with a fantastically talented and hugely disparate collective of developer partners, on wildly different types of projects”, said Lee Skittrell, Marketing Manager, Rising Star Games. “Bringing this selection of our own and our fans’ favourites all together alongside the 88 Heroes cast is a sort of celebration of our developers’ talents and our diverse portfolio, and is the kind of rare opportunity that only an open-minded and left field-thinking business vision, such as ours at Rising Star Games, can bring about”.

Due to the creative minds at acclaimed development studio Bitmap Bureau. 88 Heroes is a 2D platformer that is as fun to watch as it is to play. While we have support for Linux, Mac and Windows via Steam, Humble Store and GOG.
And since each level completed or untimely death brings a new uniquely skilled hero. Therefore the action and just 88 minutes to complete all 88 levels. Players will need every one of the 88 heroes to stop the dastardly Dr. H8 from destroying the Earth.

So the first DLC pack, 88 Heroes: RSG Champions, is available now on Steam for Linux, Mac, Windows, for free. For more information on 88 Heroes, check out the official site.