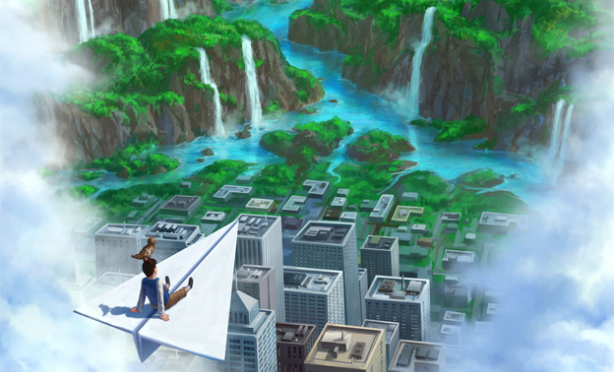 A Bird Story is Kan Gao’s (#FreebirdGames) follow-up to #TotheMoon, a quietly emotional and surprisingly deep game about life and love that’s been well-received since its release three years ago. Now, with A Bird Story launching on Friday, Gao is proud of his #newgame, but he feels the need to warn players that it may not be what they expect. It’s simpler, he says.

“The one thing that I’d like to be clear about is that I’m certainly not unsure about the game – to me, it’s perhaps the one thing I’ve made that I’d choose if someone were to ask me to,” Gao says in an email. “That being said, I don’t expect everyone to share that sentiment (it doesn’t have a more intricate story like To the Moon, for example), and I think some folks (naturally) have a certain expectation about what the next game is going to be like – I think that’s what I’m worried about. I really think it’s the kind of game that’s best enjoyed with a blank slate.”

A Bird Story is a short bridge between To the Moon‘s first and second episodes, the latter of which has yet to be released. The series deals in time travel and the final wishes of people on their deathbeds: The main episodes feature two scientists as they enter a dying man’s memories to alter events and make his final wish come true, at least in his mind. A Bird Story stars a boy who grows up to be the dying man in episode two.

In a video posted yesterday, Gao says multiple times that A Bird Story is different than To the Moon – for starters, it has absolutely no dialogue. Similarly, Gao hasn’t been very vocal about developing A Bird Story, providing minimum updates and releasing just one trailer back in August.

“I don’t really know why I’ve been so quiet about it – perhaps that fact that not a word is said in the game itself affected that?” he wonders. “And I suppose I just didn’t feel like this was the kind of game that, as its dev, I’d want to shout about. If games had personalities, A Bird Story would be a big introvert.”

It’s clear that Gao has an emotional connection with A Bird Story, though so close to release, he seems haunted by a fear of letting his fans down. He’s not an anonymous independent developer launching his first game anymore. He has a reputation to uphold – quality storytelling that had many players in tears by the end of To the Moon – along with the ever-present task of creating a good game.

“It’s kind of scary, to be honest,” Gao says in his video. “About the expectations of things. In some ways it’s very flattering – folks connected well with To the Moon and they sometimes sent me vials of their delicious tears.” He takes a drink of players’ “tears” and continues, “Salty. Most folks, they do know that – they do understand this. So I guess I’m just kind of worried so I’m reiterating it, that my goal, of course, is not to make people cry. That would be silly. My goal is to try to make something meaningful. In a very selfish way, to be honest – something meaningful to me. But hopefully one that other folks will relate to and connect to as well.”

The video also introduces a new email address where players can send critiques of To the Moon and other games that his studio, Freebird Games, releases (workonthis [at] freebirdgames [dot] com). The next episode of To the Moon will return to the two-doctor, one-patient, dying-wish format fans know, and Gao says he wants to open a channel of communication where players can critique his games without the noise of other people’s opinions.

“There certainly are still many very helpful and constructive feedback [methods], but it’s also very easy to post in reactive ways when others are involved – I think we tend to try to counteract forces that oppose us, for example, and that could often affect the things and the way things are said,” he says. “While there are merits to a space for discussion (I certainly don’t mean for this to take place of that), I think there’s also merit in having just one’s opinion sent without the effect of others or the potential fear of retaliation involved. Plus, this makes it easier for me, rather than to try and search for those types of feedback.”

Gao knows he doesn’t get to control how people feel while playing his games – once a game is in the wild, it belongs to the people playing it, and they will react according to the whims of their own personalities, upbringings, current moods and a million other factors. Still, Gao does have one hope for players of A Bird Story “Like with most things I make, I think a sense of connection with the character is the most I could ask for.”

A Bird Story is due out on Friday, November 7, for Linux, Mac and Windows.