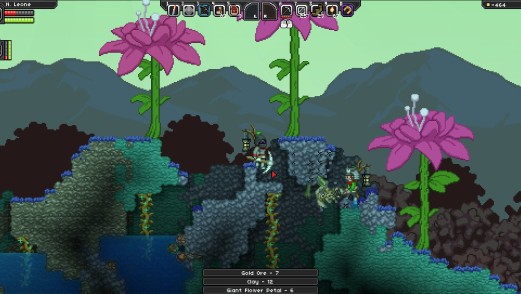 Starbound is currently available through #SteamEarlyAccess program. That means the game is still in active #development. It’s a beta test that you can pay to take part in. This isn’t a review of the final product, but one writer’s thoughts after playing several hours of the game in beta.

For years, all my favorite games were halves of themselves. They all came from the same catalogue: a PC parts wholesaler, whose monthly circular had a few backpages dedicated to flipping game floppies for pennies on the price of shipping. That, at ten, was the price I could match, so a few times a year I’d receive a package with a handful of selections, each chosen by name alone: Cosmo’s Cosmic Adventure; Commander Keen; Crystal Caves. I’d attack them with the focus and ferocity only summonable by a pre-teen drunk on summer, and eventually I’d hit the same screen: “SHAREWARE VERSION COMPLETED! BUY THE FULL VERSION FOR MORE LEVELS!”

This splash screen was a common sight then, in the early 90s, because shareware—the practice of bundling a game’s engine with its first set of levels and distributing it for free1 —was an elegant way to get your game in front of new customers. Before the widespread adoption of the internet, this was a problem large enough to sculpt the direction of games marketing in the industry. There were far fewer ways to be introduced to a game you’d never heard about; a 200-word review in the back page of a computing magazine, next to a blurry black and white screenshot, might have been the best a small games company could have hoped for.

Shareware allowed companies to not only put a feature-complete demo directly into the hands of potential fans—recall that computing trade shows used to be a big thing—but also made ad-hoc product advocates out of anyone who wound up enjoying it. “Copy this diskette!” games companies pleaded. “Share it with your friends!” And they did, too, since shareware versions often felt like complete, if small, high-quality games. (The canonical example here being shareware DOOM.) It was, while it lasted, a brilliant symbiosis between developer and consumer that helped bolster the production of videogames, even the small or niche.

You no longer see shareware used as a sales model for games, not outside of very small or personal projects, and for a good reason: Discovery is no longer the biggest problem a studio faces. This, I think, is the core difference between 1993 and 2013: It can still be hard to get your game known, but with the advent of the internet and the simultaneous rising cost of game development, it is now much harder to pay for its construction in the first place. I’d like stronger numbers on this (and please, comment on the piece if you have sources for them!), but this old GameSpot piece on Trilobyte pegs the price of an early-90s cartridge-based game at $200,000, and Erik Bethke’s Game Development and Production puts the figure at between $1 and 3 million by 2000; Grand Theft Auto V, now not even a current-gen game, cost $266 million. Not that every new game need chase these ever-rising figures, but where goes the industry at large, so goes the publishing money. A cartridge-sized game may still cost $200,000, but you’re probably going to have to find that money yourself. Developers need, in other words, a new shareware.

Happily, they already have one. Open your Steam client right now, and you’ll see that videogames are now sortable not only by platform and genre, but also by funding model. Starbound, a PC game by the ten-employee Chucklefish Studios, employs one of these2: It is an early-access beta, a model popularized by the inescapably-popular Minecraft. Developers sell consumers access to their playable, but unfinished, games, and in exchange for mid-development funding and free QA feedback, the developers open lines of communication back to those players: now that you’ve seen how far we’ve gotten, where do you think we should go?

The resultant game is therefore, ostensibly, better for having had that feedback. Much as shareware’s distribution model gifted its games an ad-hoc disk-trading street team, the early-access beta’s funding methodology creates a devoted community around a game before that game even nears completion. When it works, it can feel haiku-grade elegant.

This model is still predicated on discovery, however, and so these proto-games demand review and discussion. It is important to be fair, though; many of these betas state plainly, “THIS IS NOT A FINISHED GAME.” There are enough games in the marketplace which are released before they’re ready; it is unfair to an open beta to hold it to the standards of a gold master. Rather than ask is this game fun, therefore, I think we really have to ask: Is this a game yet?

Any snapshot of a game under development must necessarily be incomplete; the experience you’re having may be entirely transitional. An example: I tried out Double Fine’s alpha-access space sim Spacebase DF-9 to compare it with Starbound, and managed to reach the end of the game’s content in about 90 unhurried minutes. A review of the experience is almost beside the point, even though that 90 minutes was enjoyable; it is a playable concept more than it is a strategy game, and can’t hope to compare on playability alone to completed, polished titles. The experience of being part of the DF-9 community is doubtlessly what its satisfied early adopters are buying into at present3, and what gameplay review could accurately represent the experience of discussing your own personal ideas with the game’s own developers?

Given this rubric, then, here is how Starbound fares: It is definitely a game. It is already, in fact, a terrific game.

In Starbound, you play as a space traveler who has run out of fuel while orbiting around a habitable planet; without any other recourse, you warp down to the surface and begin to construct necessary tools out of the planet’s own resources. Each planet is bristling with its own unique fauna, some of whom you’ll fight off while attempting to chop lumber and ransack coal veins, and each contains several areas of interest to explore: I’ve raided science labs, fought off jailers in an underground prison, and wandered into foreign civilizations to purchase banana treats from ape-like vendors.

The game gently nudges you, after a time, towards actions which will trigger a boss battle, and successfully clearing these battles grant you access to new equipment tiers, and new galaxies to explore — and so on, until the end of the game, or at least the next patch. The endgame, and even the midgame, is yet to come. Regardless, it takes dozens of hours to push against the periphery of the beta’s breadth. I have yet to come close to it.

One of the game’s great tools is its sense of scale: There are quadrillions of possible planets in the game, and everything, from the dispersion of habitable planets across each star system to the mannerisms of a single planet’s fauna, is procedurally generated. Some early-access betas suffer by being unable to mask how unfinished they still are; Starbound’s star map brilliantly counterbalances this problem by clobbering you with the awe of space’s expanse. Two worlds of the same size and biome will feature different settlements; different ore distributions; differently dangerous enemies. Each of those quadrillions of worlds requires its own microstrategy; you come away from a game session a half-dozen mental terrain maps richer. The game, you could say, gives great algorithm.

There are hundreds of things in the game, as well. Alien outposts and dungeons are full of furniture you can steal for your own home, enough of it that even dozens of hours into the game, I’m still stumbling across new trick bookcases and golden toilets to purloin and smuggle home. The game’s developers may have much loftier goals in mind for the amount of content they’d like to bake into the final product, but the amount they began with was a masterstroke.

Delightful, too, is the restlessness you feel when you’ve scoured the surface and depths of a particular planet. There is a sense of routine one can experience in an infinite-builder game like Minecraft (or Terraria, a game which shares with Starbound not only a good deal of DNA, but also a designer). Once you’ve constructed a fortress for yourself, keeping you and your goods safe from harm, the game’s focus shifts perceptibly from survive your environment to increase your productivity. Starbound doesn’t let you rest; you can strip a planet bare of easily-accessible resources in a few hours, urging you back into space and onto another fortressless world. On top of that, while you’re able to craft a great many things at present, from necessities like food and armor to goods like dyes and chairs, your best shot at finding a truly great weapon is to find one in a treasure chest—and the fastest way to find those is to pillage an inhabited, unplundered structure. Starbound’s core game loop breaks from the tradition set by other mine-and-build games, in other words; what you build will not stand as a testament to your play, but will serve as the safehouses which enable it.

Of course, Starbound will evolve. There’s little resembling a story in the game (though there’s an existing lore framework which threatens to be delightfully exhaustive), and nothing to urge you onward to distant stars except the extra-narrative promise of “more content.” Chucklefish’s future plans for the game are thrilling, even as they imply massive impacts to the game as we now know it. (Mercenaries! Space combat! Terraforming!) The gold master of Starbound may well little resemble the picture painted here—so is the danger of previewing open-access betas. But right now, at this moment? You should come along for the ride.

Starbound procedurally-generated adventure will launch on Linux, Mac and Windows PC this month