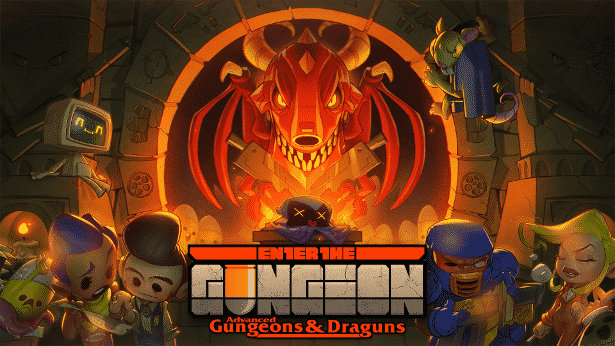 Enter the Gungeon massive new expansion Advanced Gungeons and Draguns is live on Linux, Mac and Windows. Sice this both extends and refines the original game. Also bringing in new features and incredible variety.


So Master Gungeoneers will face new challenges. Including hundreds of new rooms, new enemies, new bosses and a reflex-testing Turbo Mode. And of course, a shot at revenge against everyone’s favourite thief, the Resourceful Rat.

The eccentric developers of Dodge Roll Games. And also the adepts of Devolver Digital bullet curtains. Brings in thousands of gunmen with a hellish flame in their eyes. So this release really is a huge Advanced Gungeons and Draguns extension. But also releases for Enter the Gungeon is sold with a 50% discount on Steam and GOG.

Enter the Gungeon: Advanced Gungeons and Draguns enlarges and recycles the original game. While introducing more generous drop rates, hundreds of new gun and item synergies. Also and dozens of totally new weapons and items that will have new players.

So this means playier can get more powerful, more often. Including new obstacles in hundreds of previously unknown rooms. Particularly self-confident explorers who want use their reflexes in “Turbo Mode”.

Look for the blue arrow and improved item notification to see which items synergize.

Synergrace is a new NPC possessing powerful synergy magic, found deep within the Gungeon. Encountering her will instantly complete a synergy with an item in your possession–for a price. Also unlocking also causes a new, mysterious type of chest to appear in reward rooms. So look for it.

Also there are more quality of life improvements. Including a new ammo box type that refills a bit of ammo for all guns. Plus the ability to send heart pickups to the shop when at full health.

There is also one other secret boss for advanced players. And a ton of other things that we wont mention here.

This update was a long time coming, so if you were patient. Also there there will be bugs, Dodge Roll will work to fix them. You can help in that process, send an email with your log file to: [email protected].

So all these changes make Enter the Gungeon impressive again. Advanced Gungeons and Draguns is live for Linux, Mac and Windows. Aavailable now via Steam and GOG with a 50% discount until July 23rd.

Enter the Gungeon – A Farewell to Arms update

A Farewell to Arms the final update releases