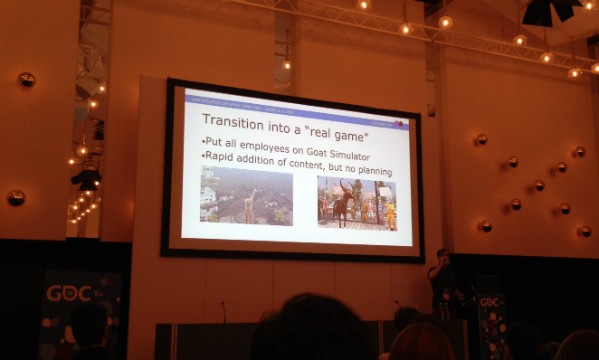 Of all the many “simulator” games, Goat Simulator stands out as one of the silliest and craziest to catch heat. That’s reflected by the #gamesales to date of “almost 1 million,” as announced by #CoffeeStainStudio’s Armin Ibrisagic at #GDCEurope this morning. It’s no surprise, then, that the studio’s now working on bringing the game to iOS and Android.

To ram those figures home, Ibrisagic said Coffee Stain made back the money it invested into Goat Simulator in “ten minutes.” Perhaps crazier, the game generated more revenue in four months than the studio had made in the previous four years.

Goat Simulator represents a surreal and unexpected success for the Sanctum studio, which, as Ibrisagic explained, approached the game as no more than a light-hearted change of pace after working on a far more serious tower-defense series for years. The moment Coffee Stain realized it had to make Goat Simulator into a real game was when its debut trailer racked up a million views. The studio diverted all employees to working on it and rapidly started adding content to it ahead of its – no kidding – April 1 release. That extra content included a giraffe – after all, according to Ibrisagic, all animals are goats.

Goat Simulator to become an MMO for Linux, Mac and Windows PC?