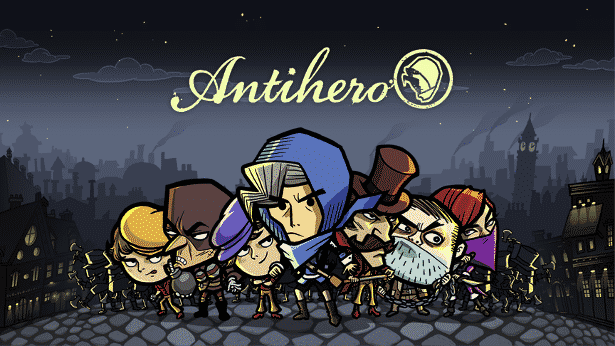 Independent video game publisher Versus Evil developer Tim Conkling finally releases #Antihero. While this is a strategic digital board game, now available on #Windows and Mac. Well, we do not have native release yet, but the game works on Linux. While the #games mobile version launching later in the year. Set against the backdrop of a gas-lit Victorian underworld.
So players assume the role of a Master Thief. Employing underhanded and ruthless tactics to dominate the city and outwit their opponents. Therefore the game offers story-driven single player campaign and a Skirmish-vs-AI mode. Where players help would-be thieves practice their skulduggery skills. All before going face to face with the games online opponents.

Since a Linux build is not available, with enough Tux support it will happen. Currently developer Tim Conkling is somewhat limited via the games framework to Windows and Mac.
However, in the meantime, installing Steam via PlayOnLinux, then Antihero, works. So we just tested the installation and gameplay, all good. For the Wine Configuation, version “1.7.53-steam_crossoverhack”. That’s it, pretty simple, even for a Windows install.

While Antihero also releases with two online game modes. ‘Casual Matches’ are asynchronous affairs – players can take their time to their next move. Since they can have multiple games running simultaneously. In ‘Live Match’, players face their opponents in real-time. With a turn-timer upping the pressure dramatically. Experienced thieves can set up custom “House Rules” to tailor matches to their tastes.

“Antihero is the archetypal turn-based strategy game. But with a distinct art style and deviously crafted game experience. It requires a healthy dose of cunning strategy. And forward thinking to outsmart your opponent,” commented Versus Evil General Manager, Steve Escalante. “The game suits a variety of play styles. From the tactical and methodical chess-like pace to a full-on strong arm approach. Muscling in on your opponent to make this a very competitive game.”

In Antihero players can test their thievery skills in an underworld. While overrun by corruption and greed, your task is to manage your thieves’ guild. Recruiting street urchins, hire gangs, steal everything. While bribing, blackmailing and assassinating your way to victory.
Since resource management is key to growing your guild. Utilize your nefarious assets as you set about your dastardly deeds. Spend your ill-gotten riches to hire new recruits. Such as thugs and saboteurs to disrupt your opponent’s progress. Then dominate key ground, upgrade your thieving skills. Acquiring deadly weapons to give you the ultimate edge. Gold is a thief’s best friend.

A 10% launch discount is available on Steam for gamers who buy Antihero in its launch week. Thereafter, the standard edition of Antihero will be available for $14.99/€14.99/£11.99 for Windows and Mac. Since Linux support is coming soon.
A Deluxe Edition for die-hard thieves and evildoers priced at $19.99/€19.99/£14.99. Which includes the complete game and its official soundtrack. While Gamer’s Gate release with a 20% discount on both Standard and Deluxe Edition‘s of Antihero. The game is also available digital retailers versusevil.com , the Humble Store and Green Man Gaming and Gamer’s Gate at full price.