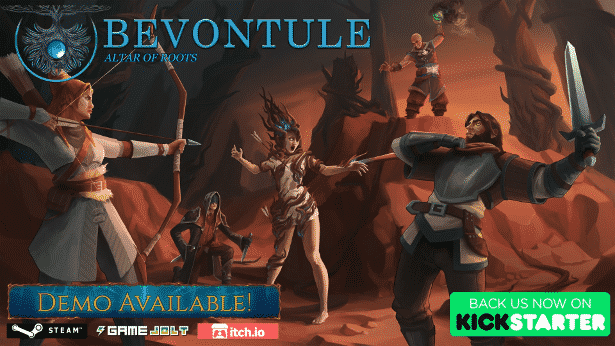 Bevontule: Altar of Roots is a stunning turn-based role-playing title via Kickstarter games. The crowdfunding campaign is seeking $50,000 USD. While gameplay takes inspiration from the classic ‘80’s and ‘90’s JRPGs.

Featuring a deep storyline and turn-based tactical combat. Since Bevontule will offer backers massive environments to explore. Also quirky characters to encounter. And plenty of open-world adventures in a state-of-the-art blend of Eastern and Western RPG’s.

In the first 2 days of the Kickstarter, Multithreaded Games already raised $10,000. Which 20% of the original funding goal. The campaign’s now 10 days in and set to end on February 28.

Also if funded, Bevontule is expected to be in backers’ hands by March 2019.

Want to get a taste of the combat mechanics?

Since you can now download the Official Demo (Windows only) from Game Jolt, Steam and itch.io. It is time to experience the world of Onich. So no Linux or Mac support for the Unity 3D demo.

Bevontule takes place on a vast and isolated land mass. While a central ocean known as the Inner Sea surrounds the land. Discovered some 1,500 years ago by a number of refugees fleeing their own war-torn homeland. It also becomes clear that despite its welcoming appearance, Onich harbors dark and deadly secrets. Those that should be left alone…presumably for good reason.

So now you will join a diverse cast of characters. Holding off the looming calamity about to hit this troubled continent. Or at least unwittingly hasten its arrival. While you explore a beautiful open world inhabited by war-ravaged nations. Also rebel factions and a far more insidious enemy.
To fully understand the existential threat presently posed to Onich. Even humanity itself! Players must traverse expansive plains and aid survivors in ruined towns. Explore dangerous caverns and safely navigate forbidden ruins. Where decaying structures are the least of your worries.

The journey ahead will not be easy. So players can expect ferocious and highly-intelligent creatures. Colossal dragons to deadly insects. Which means you also have to take down enemies in tactical, turn-based combat. One misstep could be your party’s undoing.

So expect intricate planning and execution to survive. Unlock, learn, and equip hundreds of combat skills. Also attribute bonuses, and world-based buffs. Need a break from the main campaign? Take on numerous side quests. Since you can face optional bosses and discover some fun minigames.

Bevontule: Altar of Roots is currently seeking funds in a crowdfunding campaign on Kickstarter. With a goal of $50,000 USD. The games already confirmed to launch on Windows, Linux and Mac in March 2019.