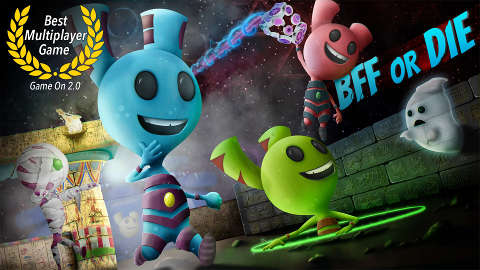 London based #HoneyTribeStudios have released version 0.22 of their #awardwinning game BFF or Die. Although still in alpha BFF or Die won the Best Multiplayer category in #Game On 2.0 earlier this year. It continues to be part of the exhibition that showcases the history of video games in the International Centre for Life, Newcastle UK until Jan 2016.

The core experience of BFF or Die revolves around a feeling of teamwork. Having seen over 600 people play at developer and consumer events the dev team have been able to sculpt the experience to one that resonates strongly with a wide audience. Communicating, panicking, laughing and celebrating together are the natural reactions as players rely on each to stay alive and solve the procedural challenges. Summarised by Chris Kingsley, CTO of Rebellion: “ BFF or Die is just great fun, with compelling and rewarding multiplayer gameplay.”

You have two choices. Help each other. Or die. This is BFF or Die, a co-op adventure through time and space!

Multiplayer games are the best. In BFF or Die you will use different abilities to combine your team skills and beat the procedural mazes together.

The new update comes after moving from the Unity 4 game engine to Unity 5 which enables a variety of new visual effects. In addition many of the textures have been redrawn for the first time-zone in the game, ancient Egypt. Lead artist Alex Baynazarov felt the older version “was not as colourful as I had imagined when we started”.  The result is a much brighter, cleaner and more cohesive visual style that compliments the characters and world of BFF or Die.

The team are now planning the next steps so BFF or Die can be taken forward to the next stage of development. Online multiplayer beckons…!

The alpha demo continues to be a Free download for Linux, Mac and Windows PC, available from IndieDB and Itch.io.