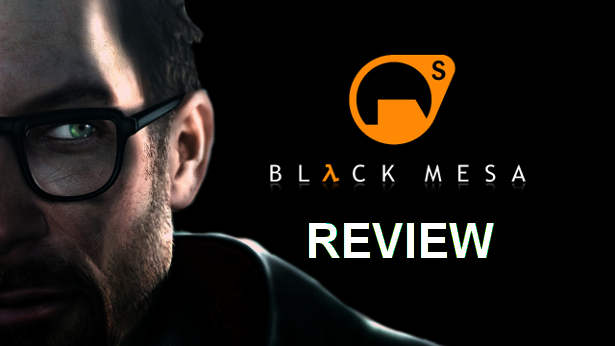 Half Life is a cornerstone of PC gaming.  When it was released back in 1998 it broke sales records, was critically acclaimed, and revolutionised the FPS action genre.  Half Life 2 continued that legacy and the rest is glorious history.

Fast forward to today and Half Life 2 has aged well enough that you can still play and enjoy it without the graphics being so mind numbingly ancient it makes you want to poke your eyes out. The same can’t be said about Half Life 1 though.

And Crowbar Collective to rescue with Black Mesa. They took Half Life 1, put some shine back on it, and released it as a full featured game. Well not full game but but we’ll get to that in the review. They’re goal was to recreate the game in its entirety using the updated Source engine of the time ultimately evolving Half Life 1 into Black Mesa.  Black Mesa although completely redone is still very much based on the original gameplay, as outlined in this review.

Let me get this out the way up front though.  I played the original Half Life around the original time of release but that was long ago. Matter of fact I don’t even remember much of it or if I beat the game.  So I’m almost looking at Black Mesa as a fresh title.

The graphics in Black Mesa by no means are cutting edge or state of the art.  But there are moments when you’ll undoubtedly stop to smell the roses and take in some of the gorgeous graphics that the Crowbar Collective team mustered out.  There are models like the walls, fences and other architecture that seemed to get nowhere near the attention as others which is easy to see without really looking. Makes Black Mesa feel a bit disjointed but I’m gonna guess this is the result of years of development.  At the end of the day the minor texture issue is in no way a showstopper.  From beginning to end I was continually engaged by the very smooth graphics, great use of colors, and environment effects. As a self proclaimed graphics whore, this game satisfied in the visual department.

The audio in Black Mesa are very well done. Environments have all the buzzes and hums you’d expect from a research facility. Stereo separation is done very well giving you a sense of space.  Once again, like the graphics, there seems to be a part that either did not get an date. Or did not get near the attention as some others.  Walking across the metal grates in the floor sounded really out of place. I haven’t checked but almost sounds like the same effects from the original game.  But again, with deep subwoofer explosions to the nuance and spatial quality of the environments you’re fighting your way through, sound is definitely a good companion to what you’re seeing on screen.

The music as pointed out in the review is a bit weird here.  Music is initiated by an event, which is okay.  Which is common practice.  The problem is that the events are very far apart. So what you are left with is a game void of any music through the vast majority of the game. Except for example when you enter or coming to the end of levels.  It’s a bit jarring and seems really out of place.  There’s no sense of angst, tension, suspense or any audible cues that gives Black Mesa more sense of immersion or auditory feels. And the real kick to the nuts is that the music is actually really good.  Good enough so that when it finally does show up, it ends so quickly leaving you wondering what the what just happened.

Black Mesa gameplay should be familiar to everyone who plays video games, let alone read a review.  Half Life pretty much set the precedence to many games we play today with its innovative ideas of the time. Short and simple is that you play the game in a first person point of view.  Something terribly wrong happens in the top secret research facility that you work at.  You get some super suit that is ideally for hazardous material use but in video game logic is like power armor. Equipped with body protection and soon after a few guns to light up your enemies, you’re the potential hero that can rescue the survivors of the Black Mesa research facility.  Definitely isn’t going to win prizes on plot, but works fine in the context of the game.  At no point am I that interested in what super slick plot twist was going to be throwing at me as I move throughout the game.

No problem learning the controls. All straight forward and as expected.

Black Mesa is a Source engine game and Source engine games probably running best on Linux.  The game ran so good actually that I was forced to turn on vsync because my graphics card was getting pretty hot while hitting the 300 frame per second limit.  Not much to say here.  No input problems, no technical problems, and just plain no problems make this an A+ game in the performance department.

IS IT WORTH IT?

Black Mesa is an early access game.  And there’s always something with early access games. So let’s get to the catch for the review. The last 4 levels are nowhere to be found. I clocked in about 25 hours on the game after beating what is there.  So there’s really not a lack of content either.  They have a tentative timeline to roll out the levels but the next level isn’t due release which is called Xen till summer of 2017.  But this is your caveat emptor warning.

Asking price is $20 which I find to be fair considering the amount of content, fun, and nostalgia this game has to offer.  If you’ve never played Half Life, I’d even say skip the original and play this one. Definitely wont leave that late 90s taste in your mouth like the original will.

All said and done, this title should be at least on your Steam wishlist.  Every PC gamer should experience the glory that is Half Life and thanks to the efforts of Crowbar Collective, you can now do so with a more relevant game.

You can find me on twitter at osirez or go to my site osirez.tech.

Black Mesa releases on Steam for Linux with big discount