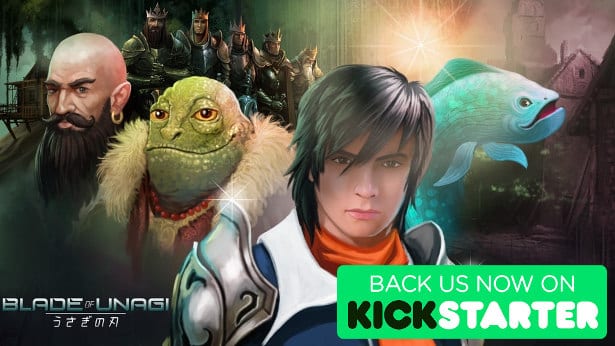 Blade of Unagi action RPG crowdfunding campaign launches on Kickstarter for Linux, Mac and Windows. With an all new video game from Black Sky Games. Which takes gamers on an epic quest to save the world. Also now live with a crowdfunding campaign. Raising funds to bring the project to life with a funding goal of $420,000 CAD.


So once funding is complete, the thrilling fantasy adventure will be available on Linux, Mac and Windows via Steam. The game will also be available in two versions. So expect a Blade of Unagi Black and Blade of Unagi White. Each with two unique scores, one for each version, provided by BAFTA-winning composers.

Music for Blade of Unagi Black will be by award-winning video game composer Garry Schyman. Who has earned a BAFTA Award for his work on Bioshock Infinite. Jason Graves will score Blade of Unagi White. Graves is also an American composer, best known for his BAFTA-winning work on Dead Space As well as his work with Tomb Raider, Far Cry Primal and many more AAA titles.

“I am pleased to be on board as one of the composers for Blade of Unagi Black. I am excited to bring my composing skills to what looks to be an amazing new game,” says Schyman. “Especially to write for full orchestra to bring all the fidelity live musicians to a game.”

Stretch goals will also be available for the campaign after hitting initial funding. The first of which is recording with an orchestra for both Garry and Jason. Recording will be video and orchestral recording and also available to backers on CD and Vinyl.

Blade of Unagi is an epic action role playing game. This also tells the tale of purpose and destiny. While seeing the growth of the protagonist and his quest to save his world.
So, in order to accomplish this task, he must confront the rulers of the world. Five kings who were given their powers by five mystical eels.

Kibo, the protagonist, with his powerful blade. Must navigate the world and confront these adversaries. Hoping to save the world in the process. A rich and immersive game with endless thrills for adventure-lovers, Blade of Unagi will feature five worlds, twenty enemy types, various NPC’s, over twenty quests, five boss encounters, and much more.

“Built with Unity and incorporating Parallax Scrolling. Blade of Unagi is a technical marvel,” says Founder and CEO Ismael Constantine. “We are working to bring an immersive and satisfying experience to consumers. There will be unique encounters along the way. Bringing you closer emotionally to the journey.”

YouTube’s Shirrako, a popular gaming channel, will host a session of an exclusive first look of Blade of Unagi, with details soon to be announced.

Blade of Unagi action RPG is crowdfunding on Kickstarter for Linux, Mac and Windows.

What are your thoughts toward that funding goal of $420,000 CAD?