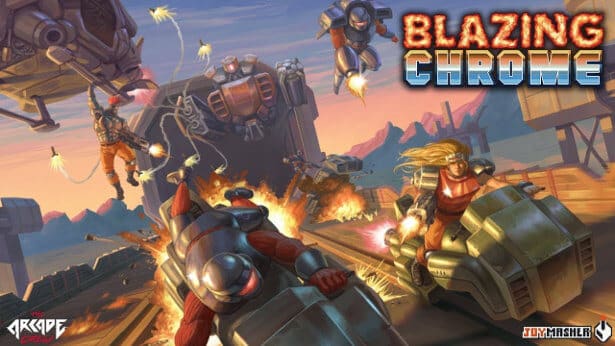 Blazing Chrome the retro inspired co-op action facing a Linux reevaluation. Since JoyMasher reveals details about the new action game. Which is coming to Windows via Steam and GOG this year. We reached out to developer regarding support.

Publisher The Arcade Crew and developer Joymasher reveal Blazing Chrome. That games a retro inspired co-op battle. Where players fight to save Earth. While facing a range of merciless AI. Which is also taking this fight to Windows in 2019.

With a modern take on the genre. This will also make gameplay feel responsive. Since players will have tear through six different stages. All full of deadly, bullet spewing AI. Doing so as Mavra, a lone human fighter. Or taking on the role of a robotic rebel Doyle.

“Joymasher would love to bring Blazing Chrome to Linux. But it’s not planned at the moment. It might be more possible to reevaluate after the initial launch on PC and consoles.”

While it seems Linux gaming is facing this battle. Since Blazing Chrome is created using GameMaker. Even with the game engine supporting Linux. Market demand and launch sales impact the port.
Since this is a hopeful request. Show some Tux Love and Wishlist on Steam. Also make sure to check out the diary video below.

So to spur on some interest. We have a gameplay clip for Blazing Chrome. Also sharing a look at the crazy environments. Plus the action awaiting players. Or those just eager to fight for a brighter future. Maybe one less mechanically dominated.
You will also need solid aim. While plowing through a warzone. All using tide changing power-ups. With your powerful exo suits and an array of weaponry.

Since Blazing Chrome is a throwback to the golden days. A side scrolling shooter with modern touches. Check out the developer diary on the YouTube channel.

To keep Blazing Chrome in your sights. Wishlist on Steam for Linux support. With enough backers, hopefully this will mean testing by the community.