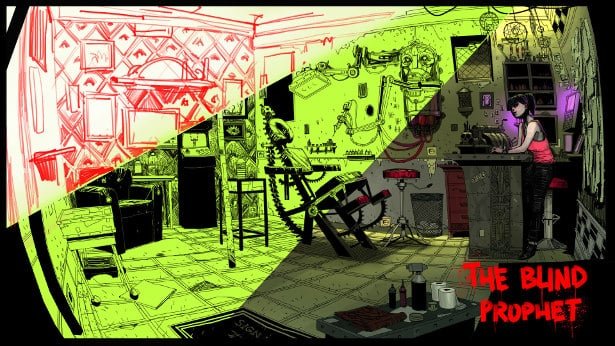 The Blind Prophet [official website] is his own, personal project coming to Kickstarter for Windows, and possibly Linux. Developer Baptiste Miny forms the one-man development studio. So every little thing that you see or hear in the game is a direct representation of his creation.


The Blind Prophet is working to create the games from scratch mostly by himself. So this includes the hand-drawn graphics, programming and writing. That’s why it is crucial to start by introducing him as an artist, gamer and a real, passionate human being. If you’d like to know more about the process of creating The Blind Prophet.

Now that you know the basics, I reached out to Baptiste back in the middle of this month for Linux support. Since the Kickstarter announcement, it seems there is interest in porting the game.

“We are using Clickteam fusion 2.5, and we don’t plan any portage for Linux at the moment. If you have any documentation or recommendation about the best way to port it, let us know or share some informations.”

Since this seems a bit vague, the game engine itself puts Linux on the sidelines. That being said, the interest is there and I have forwarded a few options to help with a Linux port.
What has my attention is the art style and graphics. Of course the Kickstarter campaign is not live yet, neither is the coming demo. So here’s hope we see support for the campaign.

The story behind The Blind Prophet. The prophecy passed on through the generations is about to be fulfilled! But this time, the Apostle Bartholomeus will face terrible and unexpected problems…
What could have gone wrong? Who is this mysterious man, trying to block the divine mission? And also, what is his motivation?

So just as in real life, there are no simple answers in The Blind Prophet. It’s a Point and Click experience taking place in a tragically blunt and mature universe. While challenging and provoking you to think about the importance of our existence. Facing things like good, evil and sacrifice.

The Blind Prophet will release next year on Windows, the word is still out on Linux. Baptiste is currently preparing for the start of the Kickstarter campaign. This will be release along with a demo, soon.