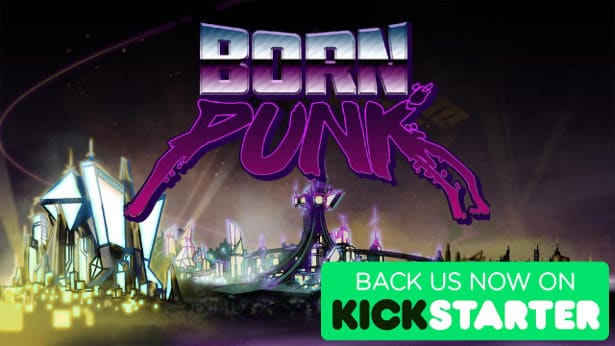 Born Punk takes you back to the 80’s and 90’s. Well in the style of classic point and click games like Monkey Island. You now play as Eevi, an ex-corporate combat hacker down on her luck. So now Eevi gets infected by a rogue AI. Also thrown into a conspiracy of epic proportions.
So now over the course of the game. Eevi has to solve logical puzzles, advance the story via dialog. Exploring the games diverse characters, and decide whether it is brains or brawn. Since each could serve her best. But for every choice, there is a consequence.

Stretch goals now included are a karma system. Also the game is now longer with in-game radio stations. While playing between the cyberworld and real world. Plus a soundtrack as well. And now working up to a third playable character

If this tickles your funny bone. Check out the Free Demo for Linux, Mac or Windows.

Born Punk takes place in the Danish island of Bornholm, in the year 2155. So now Bornholm transforms itself from a quaint holiday getaway to a mega-city. Also governed by a corporate council.
Since the island hosts a space elevator. A gigantic construct used to transport goods and people into space. The scenario also takes place in darkish and cyberpunk‘ish state. Including many genre typical themes like AI rights. Also human enhancements and the power of corporations. But ID22 also wants to portray the world with hope.

Born Punk is cyberpunk puzzle adventure doing well on Kickstarter. The games coming to Linux, Mac and Windows. Releasing on “all stores” in January 2020.