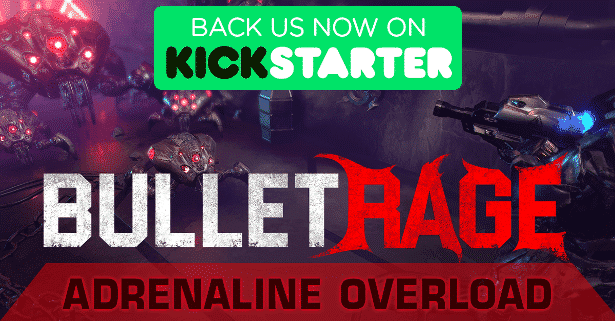 BulletRage twin stick shooter games on Kickstarter for Linux, Mac and Windows PC. The crowdfunding campaign is now live. Thanks to developer Chimera One Games. Plus you will want to check out the games Demo too.


BulletRage is a top down twin stick shooter. Which also recreates the excitement of retro gameplay. While taking insight from Japanese bullet hells. Mixing in the raw fury of DOOM. Topping that off with the carnage of Smash TV. With authentic arcade style co-op. Taking from titles like Contra and Metal Slug.

BulletRage is being shaped by the gaming communities. Those that also share the passion and nostalgia. Where the word cinematic is reserved for movie theaters.
Now at last, the project is at a calibre for Kickstarter. Actually I was expecting the campaign to kick off last month. But alas, this is a long awaited release.

And of course, you should check out the Demo. Available for download on Itch.io. Including a release for Linux, Mac and Windows PC. Who can succeed in the Beyond Infinity Mode?

Difficulty is in the design of BulletRage. The goal is to create a dynamic challenging game. Having played with the developer myself. Who also watched and discussed gameplay in our livestream. It is impressive to see how far development has come. Only to create a more intense twin stick shooter.
Chimera One first setup a minimum level of intensity. Doing so across all difficulty modes. While counter balancing in their adaptive assistance system. So that players always have the necessary tools. Conquering every impossible situation. The result is a game for both comfortable to casual players. Yet fully retains the intensity in higher difficulties.

In Normal Mode, you can take 5 hits before splattering in BulletRage. While in Hard Mode, more number of enemies move a little faster. So traps trigger a little quicker. And bullets reach you a little sooner.
You also have one less hit point. Also generate rage a little slower. And encounter power ups less frequently. The trend goes onto the top tier of difficulty, Beyond Infinity Mode. Since there are hordes of speedy enemies. All gunning for your single HP life in a flurry bullets. Not to mention the boss fights. Which also get completely insane. Since every split second decision means a few more seconds of life. Or becoming a red puddle.