Cannon Brawl officially #released on September 19th with native Linux support at 25% off on Steam (Mac and Windows PC included)! Influenced by GunBound, developer Softnyx’s turn-based #multiplayer game, as well as several other of his favorite game types. The release of Cannon Brawl also comes with full controller support while giving the gaming community another completely playable game on our beloved platform.

Here is the gist behind Cannon Brawl:

Cannon Brawl is an exciting mix of real time strategy and artillery gameplay. Command your airship to capture gold mines and build everything from cannons to lasers. Drop attack buildings from your airship, then pop into them to take skill shots at your opponent in real time. Upgrade each building to boost its devastating power. Advance across the kingdom in single player to unlock and discover new buildings, then experiment with each one to find your favorite combination in online multiplayer.

Addictively fun and fast-paced, Cannon Brawl is launching on Steam for PC and Mac.  This is an intense action-strategy game that combines the skill-based play of a classic artillery game with the rapid-fire pacing of an RTS. Matches are quick and players will need to think fast to outwit and outmaneuver their opponents.  Players choose from a wide array of pilots and war machines to create a combination of buildings that they can drop from airships across destructible 2D multiplayer maps to decimate their opponents.  With resource management, territory control, and war machine upgrades, players will find a fierce real-time battle experience wrapped up in an enchanting fantasy world. 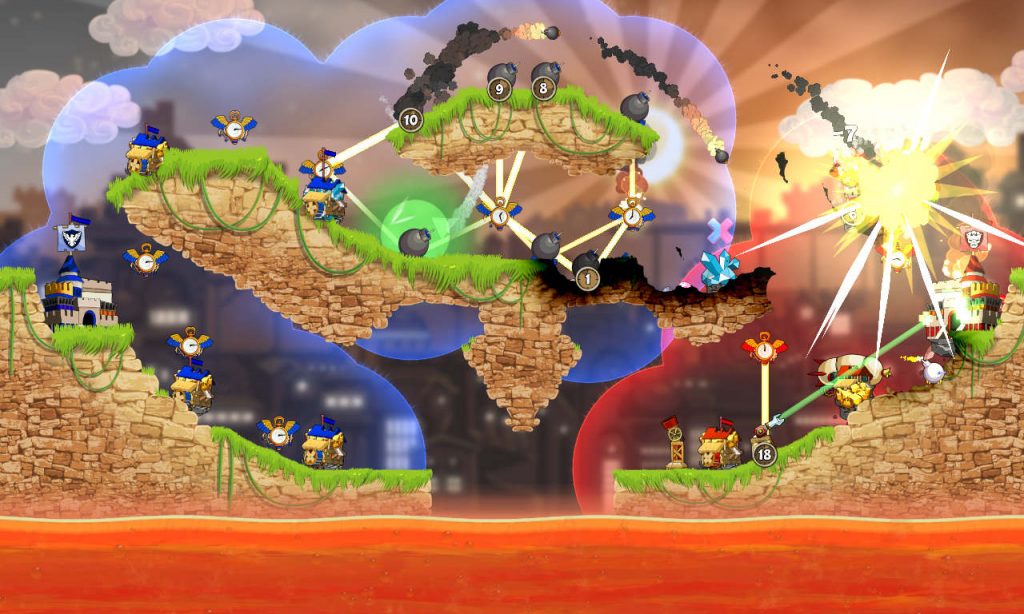 When a round begins, you find your castle positioned near the edge of a cramped map. As rousing battle themes pipe from your speakers, you stake your claim to verdant hills and blue skies, to deserts so yellow you might wish you could vacation within one. Floating landforms populate the foreground, which you and your opponent can blast away with shots from cannons, lasers, and other such contraptions. There’s no turn-based respite, though, in spite of the cheery vibe; you make your decisions and you execute all plans on the fly, with as little hesitation as possible. Speed is a necessity, or else you might line up a beautiful shot just in time to find out that your laser tower has been blasted to smithereens by a roaming ball of explosives.

Using your keyboard or a gamepad (the latter works particularly well), you can pilot the ship anywhere you like without having to worry about taking damage. You must make quick trips back to your castle to grab new structures, then plop them down at key points along the map. Your expansion options are limited at first, until you have placed enough surveillance balloons, mining camps, and other such attractions along the way. Then you can dock with a given point of interest–for example, a rocket launcher–and direct its actions. Although there are times when dropping buildings and docking require excess fiddling, particularly when too many structures are in close proximity, the interface works beautifully and allows you to work at the brisk clip gameplay demands. 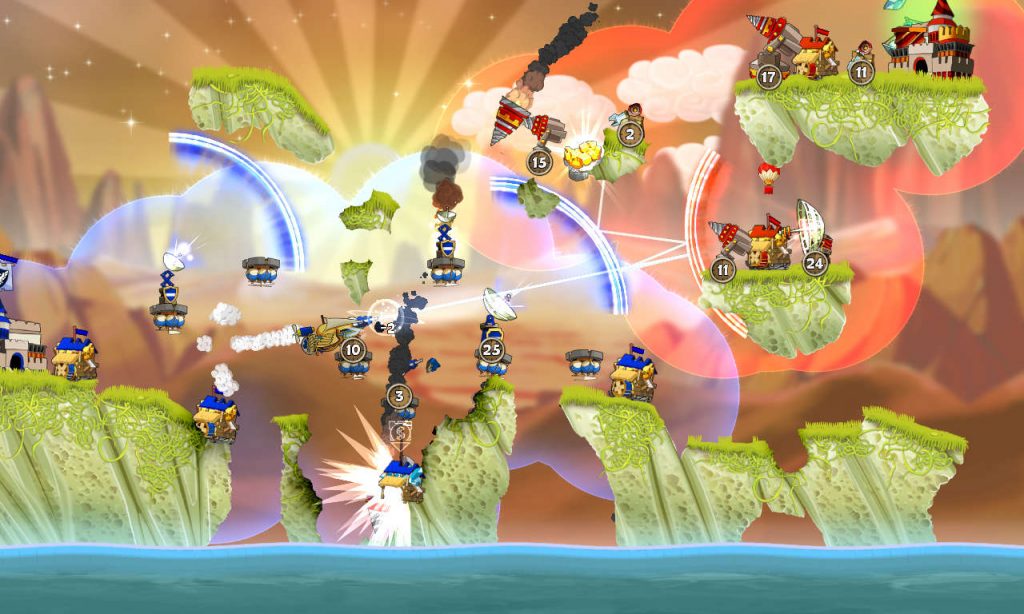 As the game begins, there are only a few offensive measures available. Even once you advance far enough in the campaign that your list of options expands, you can bring along only a handful of tools. You almost always have to survive without something important, and your computer opponents are great at adapting to diffuse any winning tactic you might employ. This means that if you try one technique in a round and it fails for a particular reason, switching to a different one the next time around is no guarantee that you’ll find success: the AI could easily adapt and catch you by surprise in some other manner. Such adaptations keep matches interesting, because you always have to stay on your toes and watch for attacks from a few potential directions even as you replay the same map.

You start by claiming as much territory as possible and building mines. Then you drop a few towers and dart between them, firing shots at your opponent and hopefully taking out his or her resources before the tide of battle can turn against you. Your greatest ally besides speed is momentum, and the combination of the two often wins out against the more creative and interesting approaches that the the game allows you to explore. Even in online matches, simple strategies easily overwhelm opponents using more varied forms of weaponry. Over time, you earn experience points that allow you to access additional pilots and structures in the armory.

The game’s difficulty level already feels punishing enough when you play on the higher settings. Almost before a round even begins, it throws up shields, health-regenerating towers, and upgrade cannons. Meanwhile, you might still be struggling just to get a few balloons in the air so you can start mining. Such battles commence with momentum and resources already working against you; the obstacles are hardly insurmountable, but if you want a fair conflict, you’re better off finding human opponents instead.

Cannon Brawl is interesting to keep you more than entertained but once you start, time passes, you get apt to finding new in-game challenges. Then if you’re brave, take on higher difficulty settings or play online. If you can find a few friends at a similar skill level to challenge, you’ll likely enjoy several hours of strategy mayhem. Coupled with exceptionally nice graphics on accommodating sound effects and music, you will be engrossed in no time. To top it off… Cannon Brawl is now 25% off on Steam on Linux, Mac and Windows.