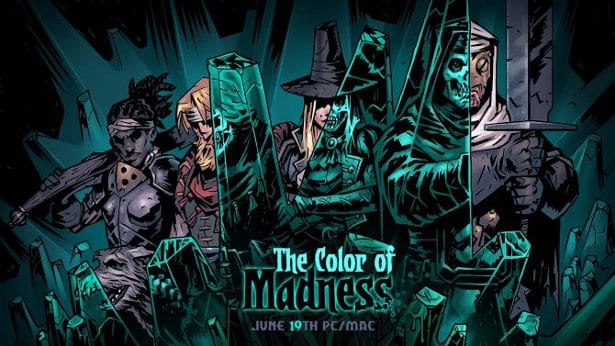 The Color of Madness launches for Darkest Dungeon on Linux, Mac and Windows. Which also comes with a number of new features. But the biggest is the new “Endless Harvest” quest which is an Endless Challenge mode. Now live at 10am Pacific Time on Steam and Humble Store..

So now, heroes can undertake this Endless Harvest quest. Fighting off wave after wave of enemies in pursuit of new personal bests for kills.

Players are will can push through the Endless Harvest to the bitter end. When heroes die in this ethereal realm, they don’t permanently die. But instead are Lost in Time and Space for a week or two. This encourages experimentation and risk taking.

Also, a new tab on the Stagecoach allows the recruitment of Shard Mercenaries. Heroes whose only purpose is the Endless Harvest. They are powerful, but take payment in Comet Shards.

To coincide with The Color of Madness DLC, Red Hook Studios also have a MASSIVE BALANCE UPDATE on the core game. So this means every single Class gets a tweaking. And there are even some new mechanics, such as Crit Buffs: now. When heroes land a crit, they get a temporary buff that fits their character class.

The Color of Madness launches:

Yes, The Color of Madness is launches for Darkest Dungeon priced at $4.99 USD/4.99 GBP/4.99 EUR on Steam and Humble Store. With a day-one release for Linux, as well as Mac and Windows.

The Color Of Madness DLC coming this June