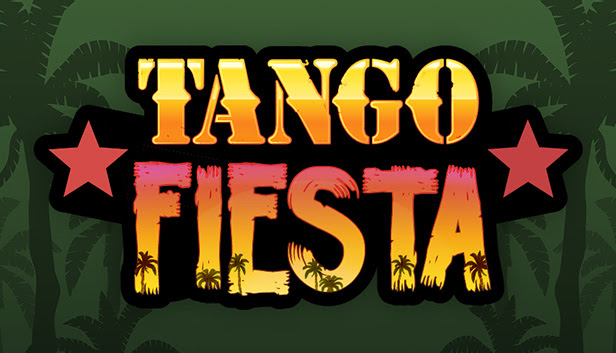 Tango’s been in development for just over three months now, and while it’ll launch on PC & Mac on the 4th June we’re aiming to get #Linux support in there after that, as soon we can.

Tango Fiesta is a top-down, co-operative twin-stick shooter for up to #fourplayers, where the wacky, frenetic, comical, over-the-top, cheese-fuelled action of your favourite 80’s action movies becomes reality. Gamers across the globe take control of John Strong – the original hero’s hero – as you and three friends shoot, blast, brawl, dodge roll, upgrade, unlock, smash and puntastic one-liner your way through the true stories behind all of the greatest 80’s action classics in this endless (and endlessly entertaining) arcade action ‘rogue-lite’.

Be prepared to adapt your tactics as you choose your favourite characters, and equip them with the most explosive firepower this side of Arnie’s biceps. Choose from a wide range of recognisable and scenery-chewing weaponry! We got assault rifles, shotguns, grenade launchers, we got sonic electronic ball breakers! We got uzi’s, we got knives, sharp sticks…* the forces of evil need terminating and we give you the right tools for the job!

*We don’t have any sharp sticks… yet.

With the Early Access version, players are invited to supply feedback to the developers and help direct the focus of future updates, ranging from new heroes, weapons and worlds to vehicles and bosses.

Andrew J Smith, founder of Spilt Milk Studios, says, “There are so many classic moments of satire, outrageous violence and quotable dialogue in all our favourite 80’s action flicks and we’re making Tango Fiesta the ultimate love letter to every last one of them. We can’t wait to see what the fans think!”

Andy Payne, CEO of Mastertronic, adds “I’ve got a feeling that once fans get hold of this the going will get tough, but we know Tango Fiesta fans will get going.”

Tango Fiesta is coming to Steam Early Access and Get Games for PC and Mac on June 4.

Spilt Milk Studios was founded in 2010. So far, they have released two commercial games – Hardlines, co-created with Nicoll Hunt, and Crunch – and two experimentals – Hugatron and Tomb. Juicy, spicy and exuberant are three words that sum them up in a kind of airy-fairy, arty-farty, nebulous, feely way. They make games they love to play!