Dark Souls-like game from Terry Cavanagh will not be released

Terry Cavanagh, the independent developer behind tough-as-nails games #VVVVVV and #Super Hexagon, was until recently working on a Dark Souls-inspired dungeon crawler that drew from Japanese RPGs and Street Fighter. Unfortunately, that game won’t be released, Cavanagh announced on his dev blog today.

Why? It just wasn’t working out, Cavanagh said.

“Essentially the design just wasn’t as deep as I had hoped when I initially prototyped it,” Cavanagh said, “and we got carried away and let the thing grow huge and way out of proportion. We ended up with something that was gonna take months to finish, and probably wasn’t a strong enough idea to be worth that kind of time.”

The idea for the unnamed game dates back to last December, when Cavanagh posted a Vine video of a simple-looking dungeon crawler he’d made during a game jam at London’s Victoria and Albert Museum. 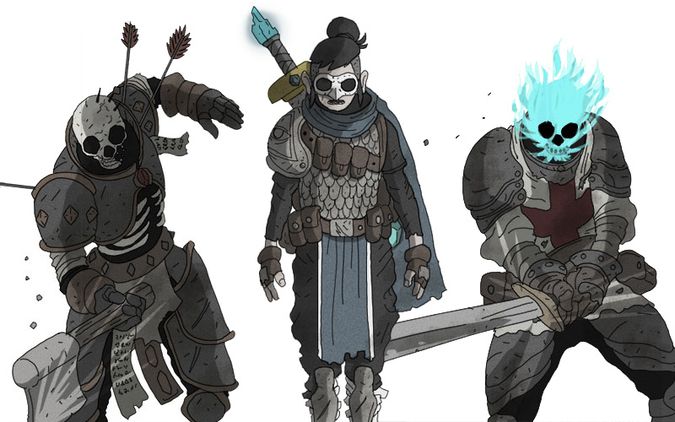 “One of my favourite recent games is Dark Souls, and [the jam] seemed like a good opportunity to make a small Dark Souls inspired thing,” he said. “One of the many things I love about that game is how it tells you about its world — letting you slowly piece things together for yourself as you discover useful game items containing parts of its history, fragments of stories with crucial details omitted.

“I thought I’d try making a sort of dungeon crawler that had the same approach to item lore, only, based on real life museum exhibits from the V&A. Items that implied details of history lost in time, mysteries never solved. Pretty straightforward for a two day jam, I figured! Anyway, I got sidetracked and made a cool combat engine thing instead.”

Cavanagh enlisted artist Cristian Ortiz to make the game much prettier, filling it with gorgeous chaos knights, skeleton warriors and spell-casting frogs. And now that the game has been canceled, you get to see what Dark Souls-esque enemies Ortiz whipped up for the game. (There’s more at Ortiz’s Tumblr.)

As for how the game — which was set in a medieval monastery — would have played, here’s how Cavanagh described his untitled game in an email to Polygon.

“The basic idea was a stop-the-dot style combat system with lots of enemies that did weird and unexpected things with timing,” he said. “The basic moves were an attack, which could be chained multiple times if you’re good enough, and a block, which got more and more difficult with later enemies. From there, [mechanically] it played very much like a 1 on 1 JRPG, with status effects, etc.”

Cavanagh points out on his blog that he makes game prototypes and experiments all the time, and the majority never get finished. But since the Dark Souls-like dungeon crawler was a collaboration and resulted in some beautiful artwork, it deserves to be seen, if only in concept art and animated GIF form.

indiecade:“Every small detail in a game gives you a sense of the person who made it, and that’s just something you don’t get in a game that’s made by a big group of people.” Click over to read the whole interview with Terry Cavanagh, the game designer behind VVVVVV, At a Distance, and freeindiegam.es!