DASH now has a multiplayer mode DASH: Danger Action Speed Heroes has a multiplayer mode for Linux and Windows PC. Thanks to developer Baby Duka. Who continues to upgrade the game through Early Access.

DASH: Danger Action Speed Heroes a 2D platformer which serves one goal. To make players create levels and clear them as fast as possible. Therefore, as the player, you create the levels, playlists and worlds. Then let others explore your creations. The leaderboard shows which runners and creators are the best. And also who is the smartest and fastest of them all. With a monthly update cycle, the game with a new game mode, multiplayer.

A new build is live. While there is only a few bug fixes and a nice new ‘reversed’ slope (basically an upside down slope to give new shapes to structures in levels) we are also introducing the first multiplayer mode in the DASH: Danger Action Speed Heroes game. But behold… you must be patient because there is still some way to go until the mode is all the way in the box!

Even with the new mode and keeping competitive. DASH: Danger Action Speed Heroes is still one of the most frustrating games. Since you have to dash, double-jump, triple-dash, and bullet jump. You can also wall slide your way to victory. I mean it’s just insane. And think Baby Duka are leveling up the madness.

But the best part of DASH: Danger Action Speed Heroes… creating your own levels.

What’s more, the slope tiles can now be placed upside down. So this means that they work on ceilings too. You can also help perfect the algorithm. Along with helping report bugs or offering your feedback. Doing so on the developer Discord server under #bug-reports.

DASH: Danger Action Speed Heroes is all about the ongoing. While you seek out those shiny and colorful diamonds. How fast you can run through each level determines your status as a runner. Now with the new Competitive mode. This proves your worth as a creator. And the fastest and smartest will be rewarded.

Available for Linux and Windows PC on Steam. A really awesome and frustrating game, priced at $9.99 USD. 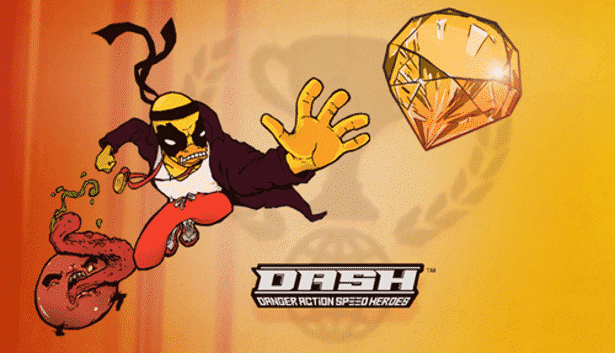