One of the more epic releases in gaming news is a Motion Twin launch. Hence the roguevania action-adventure game, Dead Cells. Currently available on Steam Early Access for Windows PC players. While that may seem a bit discouraging, due note that the game works beautifully on Linux via PlayOnLinux.

Why is this important news? Check the Steam reviews for Dead Cells.

The process is simple, just install Steam as you normally would via PlayOnLinux. Making sure to run the correct version of Wine and you should be good to go.
Why? Well the game engine for Dead Cells is custom built So not to fear, the install files show OpenAL, SDL2 and what we can presume is OpenGL as well. Expect the game to keep working. 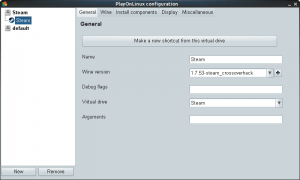 Also, under the Display tab, set the Video Memory Size for your GPU. Hence you should be good to go from here. Just install, launch and keep gaming. Since you might die a few times.

News of a Linux release?

“A linux release is planned, but not for the EA release. However, Linux support will be on day one for the full release at the latest. “

Since the player takes on the roll of a green mass of sentient cells. So use this discarded corpse and explores a castle on an ever-changing island. Where survival is a precarious and ephemeral state. While death, however, is only the beginning in this alchemy-afflicted world. Since it’s just one more opportunity to unlock new weapons and skills. Discovering outlandish areas to plunder hidden secrets of this roguevania.

So Motion Twin’s current plans are to develop Dead Cells over 8-12 months in Early Access. While taking into account community feedback and requested features. Ultimately this will double the currently available content by the end of the Early Access.

Dead Cells combines the progressive exploration of a Metroidvania game. Along with the high-stakes replayability of a Rogue-lite inspired game. So this includes special powers available that unlock new areas and paths. Along with secret rooms, big boss battles and other types of character progression. Also randomized loot, fluid and fast-paced combat are complementary to the replayability of rewarding permadeath game design.
So yes, I have been playing Dead Cells roguevania since before Early Access. And the game continues to get consistent updates. Plus given the already mentioned OpenAL, OpenGL and SDL2 support. Well let’s just say that playing on Linux continues to be stellar gaming.

Dead Cells is available on Steam Early Access for Windows PC for $16.99 (USD). Hence the 15% launch discount until May 17th.