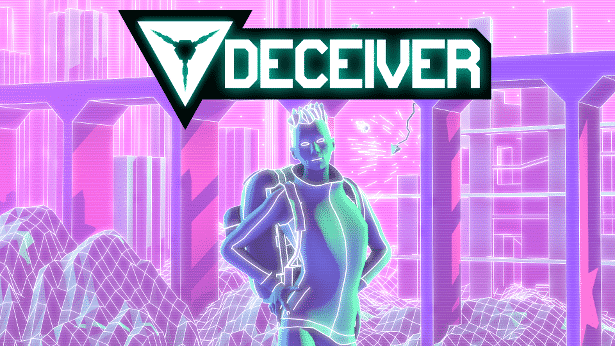 DECEIVER [official website] is a new indie game in development for Linux, Mac and Windows coming to Steam games. Where you as a player have to launch your spider drone at walls, ceilings and enemy heads. All while you play through this pre-apocalyptic philosophical shooter.

So The players task is to explore a vast cyberpunk city. While using first-person parkour movement mechanics.
Fight with other online players for control of the city. Doing so by finding and unlocking terminals. Which allows you to deploy and control your spider drone.

What’s the story with DECEIVER?

The world is about to end. So those who can afford it have already abandoned the planet for an off-world colony.
Since this is a zero-sum game between you compete against every other player. So you can steal their resources, but make sure to defend your own. Or will you scrounge together enough money to escape before disaster strikes?

The game features true 3D combat. So with spider drones crawling on walls and ceilings. And launching themselves at enemies. It sports a vector geometry art style inspired by the 1982 sci-fi film “Tron”. All powered by a custom engine. Everything is built from vectors, right down to the font.

DECEIVER is a unique philosophical shooter but similar to Tremulous and Natural Selection 2. And gameplay looks interesting. While launching your drone at people seems a bit weird. The games designed to create your own dedicated virtual server. Which definitely had my attention.