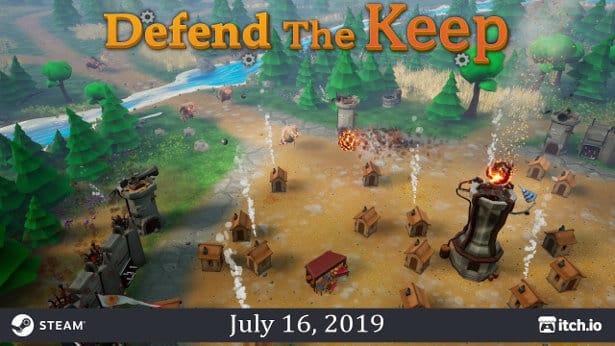 Defend the keep is a new fast paced strategy coming Windows PC, we have news about the Linux port. Thanks to Vanille Games who are releasing their debut game. Which is coming to both Steam and Itch. io on July 16th.

Defend The Keep has been developed with Unreal Engine 4. Texturing has been done with Substance Painter 2 and 3D-modelling with Blender.

I have plans to look in to making a Linux port. After the Windows release. But I can’t promise anything at the moment. Being a solo developer, I have my hands quite full with the Windows version and marketing.

I have been able to play Defend the keep on Ubuntu 18.04 with highest graphical settings and smooth fps. But unfortunately it will need some customization on the shader side. Some shaders have components. Which aren’t supported by OpenGL. So I have to figure what is the problem and come up with some compromises. The problematic materials just don’t render at the moment.

Based on my test, everything else is fine and it runs just as expected.

While good news, this is not a full out confirmation. However, it’s a pleasure to see Vanille Games interested in Linux. Let alone the use of Blender.
Neither Steam or Itch.io show any signs of native support. But this is going to be a wait and see. First on the success of the port when time allows. And also community feedback for a Linux build.
So show your Tux Love in the Discussion Post. And also make sure to Wishlist on Steam.

Take control of the keep tower and blast. While you electrocute and poison waves of enemies. Defending your villages.
Defend the keep takes you through forests, fields and mountains. So you can defend against wave after a wave of creatures. Blast enemies, build towers and defend the keep. Doing so in over 20 levels. And figure out what’s behind the sudden attacks.

The waves will get bigger, stronger enemies will join the battle. So get your aim straight, because every fireball counts.

“Real-time strategy has been my favorite genre for over a decade. But in many cases, I’ve missed the fast-paced, palm sweating intensity, of an overwhelming tower defense match. I’ve tried to mix the best of both. While I’ve worked on Defend the keep. And I hope the players will get an intense experience. To enjoy the fantasy setting of my first game.”

Upgrades:
Upgrade your abilities with nine perks in Defend the keep. Doing so during each level. Receive upgrade crystals based on your success. And then unlock the 12 building upgrades and their three tiers.

Time mode and new game mode:
Need more challenge, or maybe missing an upgrade crystal? Play the levels on time mode, but hold on tight. Defend the keep‘s speed keeps getting faster. So there’s no way slow down. Finish the game and start a more challenging new game. Increase difficulty and test your skill.

Defend the keep is a fast paced strategy. Some might call this a literal tower defence as well. But the games coming to Windows PC on July 16th. While a Linux will follow based on the developers own port success.

Defend the keep native build and the release