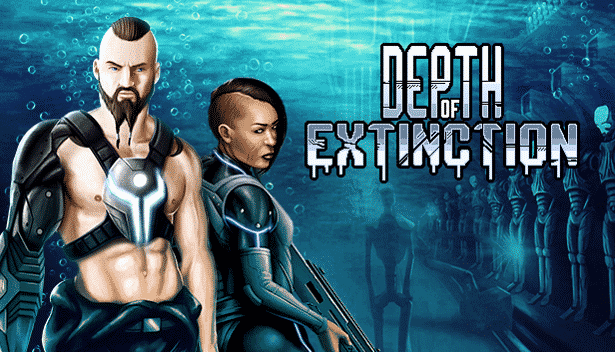 Depth of Extinction sharp turn based strategy game with roguelike elements launches on Linux, Mac and Windows. The game is available now thanks to the work of HOF Studios. Available on Steam, Itch.io, GOG, and Humble Store. Where gameplay takes inspiration from genre stalwarts XCOM 2 and FTL: Faster Than Light.

Gameplay allows players to handpick fighters from a roster of hardened operatives. So they can join their squad and battle vicious factions or killer machines in defence of mankind.

Depth of Extinction’s terrifying underwater world is rife with violence. Therefore players get into complex gameplay, real permadeath, and superb pixel art. So whether they’re strategy novices or veterans looking for their next jaunt. While the turn based strategy gameplay will keep your interest.

Deep Rising
Thousands of years ago, an unknown calamity plunged civilization to the bottom of what is now a vast ocean. While the waters rose, those who survived the event formed a new society known as the “Creators”. Rebuilding the human population – producing advanced technology to better suit their needs.
While eons passed, the Creators faded from existence. Which also leaves behind remnants of their civilization and technology.

With the seas more uncertain than ever, mankind has split into multiple factions. Including “The Republic,” which used the machines left behind by the Creators. And became the most stable faction (while the others favored violence instead).
However, these machines started to fail them and the population grew wary of the future. While rumors of killer machines or worse in faraway seas. Humanity’s only chance at survival is to venture into the unknown.

Depth of Extinction’s engaging storyline is rich in detail. Since details unfold gradually through random encounters. For maximum tactical freedom, the game also allows you to choose from 8 different classes. Each with their own unique skills. Also up to 115 different weapons, armor, and items. So think ahead and think fast to remain in one piece after each mission.

“I started playing tactics games in the ‘90s with the X-COM franchise. It’s funny to think that I’ve had a long-running love for the genre for a couple of decades now,” says Mike Stumhofer, founder and lead developer at HOF Studios. “My favorite game at that time was Terror from the Deep. Depth of Extinction is essentially a spiritual remake of that game. Along with a fresh take on the modern XCOM gameplay mechanics – including random encounters.
Most games focus on creating threats to humanity like aliens, zombies, vampires or other monsters. While our game is grounded in something more realistic. The greatest threat to humanity is humanity itself. Our characters don’t know what causes the fall or how we got to where we are. But we know that the root of the evil was humanity itself.”

Depth of Extinction is now available on Steam (Linux, Mac, Windows) for $17.99 USD. This includes a 10% discount until October 4th. Where the game will return to its original price of $19.99 USD. Depth of Extinction also launches on Itch.io, GOG, and Humble Store.