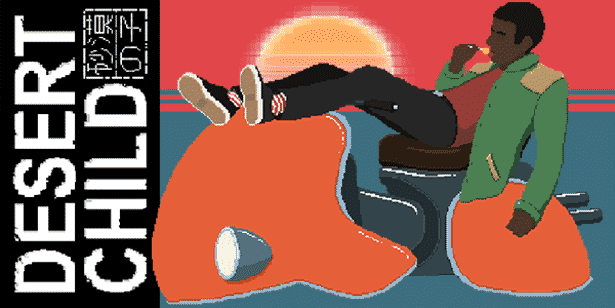 Desert Child the racing action RPG has an official launch today on Linux, Mac and Windows, which is available for download. So a couple of days ago we released the new the stylistic launch trailer. Plus the announcement of a music track paying homage to the anime Cowboy Bebop. Also the creation of the sole developer, Oscar Brittain. Available on Steam, GOG and Humble Store.


All players in Desert Child start off as a broke hoverbike racer with talent. Working to find a way off Earth to get to Mars to compete in the Grand Prix, the greatest race in the universe. So you will have to explore the vibrant pixel-art solar system in this racing adventure with colorful sidequests. Also race in fierce hoverbike competitions, of course. Plus this all comes with a chill, lo-fi hip-hop soundtrack.

The world as we know it is slowly starting to become un-inhabitable. So many people on Earth move to Mars for a better quality of life. Go figure, right? Since this all works, thanks to a government subsidy that assists in relocating citizens. Which also means this a more affordable passage.
So, after several years of running this program. The government releases new that in two weeks, tickets to Mars would go up in price. This also makes the exodus to the Red Planet unobtainable for regular citizens.

Desert Child action RPG is available for download on Linux, Mac and Windows. Which also launches for $11.99 USD on Steam, GOG and Humble Store.