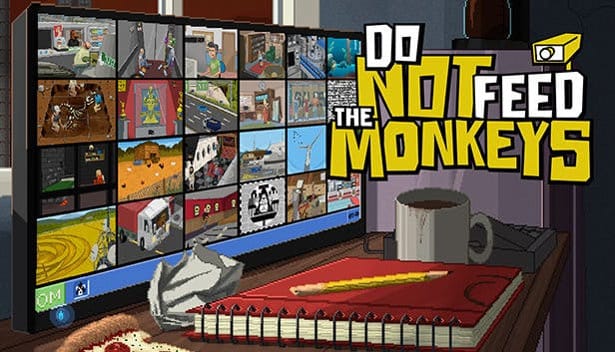 Do Not Feed the Monkeys choice based strategy sim on Mac and Windows but Linux support is coming. Sorry for this late post. New and Linux confirmation was posted some time ago via Steam.

“We are testing Linux-version right now and if everything is cool, we will announce Linux-release. Stay tuned!”

This was posted on Steam back on Novemberr 2nd. Almost a full month back. So my humble apologies. But I can confirm that this is once again, a Unity 3D build. So porting to Linux should be straight forward.

Make way for a game that evokes the feeling of a ‘Surveillance State.’ Do Not Feed the Monkeys is an Award Winning ‘Digital Voyeur Simulator’ with an official release on Steam. Launching back on October 23rd. So support should be soon, just no ETA yet.

In the Do Not Feed the Monkeys story-driven title you’ll become a new member of the “Primate Observation Club.” Where you invade the privacy of dozens of strangers, while you witness their most intimate moments through surveillance cameras. And trying to keep up with the rent payment. With enough money to buy some food from time to time.

“Do Not Feed the Monkeys is our most ambitious project to date,” comments Alberto Oliván, Narrative Designer at Fictiorama Studios. “We have had total freedom when it comes to design the stories and the game’s mechanics and, as a result, the player will experience different situations and face different endings based on the decisions they take.”

Do Not Feed the Monkeys is a “digital voyeur simulator” a story-driven game. in which you invade the privacy of dozens of strangers while you witness their most intimate moments, trying to keep up with the rent payment and have enough money to buy some food from time to time…

Do Not Feed the Monkeys sim Trailer (Linux, Mac, Windows)

You’ll be the new member of the “Primate Observation Club,” which of course is not the wildlife conservation society that the name suggests. It’s a cover for a clandestine group that watches over people through surveillance cameras and unprotected webcams. Tired of living in a shabby apartment and having boring jobs, you have been accepted as part of this exclusive organization, so you’ll be able to spy on the “caged monkeys.”

The game, which has strong “pixel art” visual style, allows you to browse social networks, wikis, websites, newspapers, online stores and chat rooms, where you can collect information about the “monkeys” you’re spying on. The Club forbids you from interacting with those you observe (i.e., “feed the monkeys”) … but what will you do? Are you going to intercede in the name of justice? Will you sabotage their dreams? Or will you sit around doing nothing while you watch the world burn? Everything you do (or stop doing) will have consequences.

So there you have it, Do Not Feed the Monkeys sim is coming to Linux. Currently only available for Mac and Windows on Steam and Humble Store priced at $11.99 USD.

Do Not Feed the Monkeys has a native release