Illwinter has announced that Dominions 4 is now available for PC, Mac, and Linux. In the game, players take on the role of a would-be god and must lead their followers on a path that ensures that you ascend to true godhood. #Dominions4 boasts several #new #improvements in the series and may be the best title yet. Read on.

From the Press Release
Illwinter is pleased to announce that 15 years after the first Dominions brought fantasy grand strategy to a new level of detail the fourth installment is now available on Desura for PC, Mac, and Linux. In Dominions 4, you are one of multiple would-be gods in your realm and must lead your followers on a path to ensure that it is you who ascends to true godhood. The ascension requires the conquest of your enemies through military or force of your dominion or to capture enough sacred Thrones of Ascension to claim your rightful spot. Find out more at the Dominions 4 Desura page. 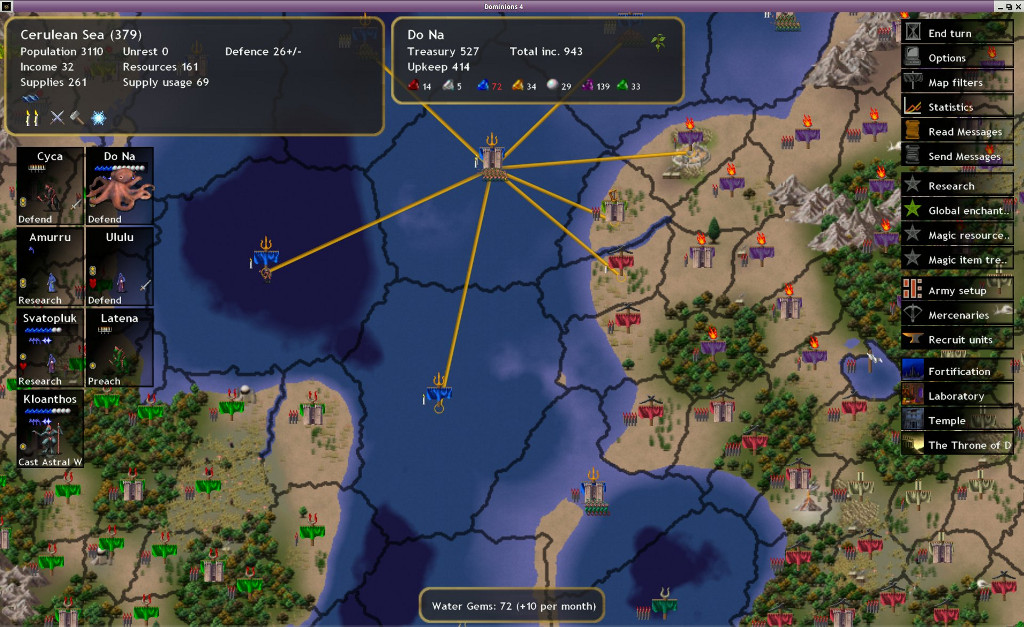 Dominions 4 is divided into three playable eras, early, middle, and late. Each era has different, yet connected, nations. Every nation has a variety of historical or mythological troops that are connected to real world history and mythos as well as various other benefits or problems. Upon selecting a new nation you will also be given an option of would-be gods to select. Every god is radically different with different mythos, stats, powers, and magic and can be massively customized to fit your nation or strategic plan. Perhaps you wish to create a hulking Cyclops with rock like skin and the proper magic to forge super powerful magical items, sending your god to the front lines and obliterate your foes. Perhaps, instead, you would create a physically frail Phoenix, instead using your magical fire affinity to rain destruction across the battlefield as well as through global enchantment without a care in the world if he dies, for if a Phoenix dies in your domain it is instantly reborn at your capital. Or stranger still, to create a god that summons monsters every turn like Pan and focus instead on leaving him in the safety of your capital summoning creatures from mythology to do his bidding alongside the regular national troops. There are millions of possible combinations to choose from.

Dominions 4 brings several major improvements and changes to the Dominions franchise. The largest of these changes is the Thrones of Ascension, which not only add valuable boosts to your blessed troops and help spread your dominion, but give an objective based game that is much faster than the previous Dominions games to win at. Additionally Dominions 4 has Disciples Mode, which adds a co-op mode where multiple players can have mini-gods called disciples which work together to ascend their pretender to godhood. Veteran players of Dominions will find a lot of UI and streamlining improvements, including the ability to auto-recruit, set battle formations, wrap-around maps, improve fortifications, and much more. Lastly the number of units and nations has increased about 20%, adding even more variety to the already robust world.