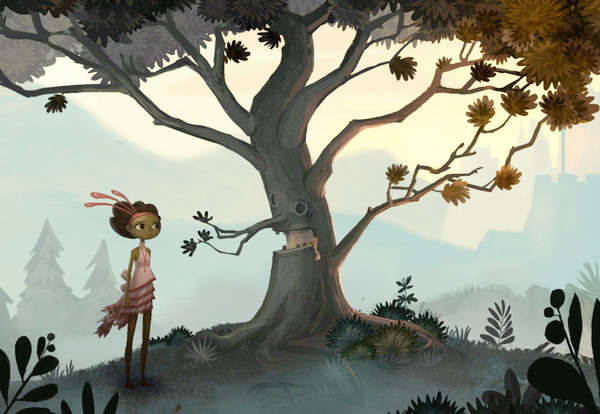 Broken Age Vella, a character in this game for Windows PC, Mac and Linux, flees a possible sacrifice to a monster. Double Fine

Perhaps the most impressive thing about Broken Age, an enchanting, imaginative fable from +DoubleFine Productions, is that its makers have created a video game that is at least as interesting as the story of how it was made.

Its release — the first act of the game went on sale this week, with the rest promised as a free update later in the year — cements Double Fine’s pioneering status as a studio that has made the transition from Triple-A publisher (industry lingo for the producers of big-budget blockbuster games) to indie developer, instead of the other way around.

When Tim Schafer, the founder of Double Fine, went to Kickstarter a couple of years ago to ask video game players to give his company $400,000 to make an adventure in the tradition of the games he made at LucasArts in the 1990s, he was considering laying off some of his employees if he couldn’t raise the money, according to the web documentary about the making of the game that was released to backers of the project. In the preceding couple of years, the sequel to Brütal Legend, a paean to heavy metal that starred Jack Black and was well-received by critics but underperformed in the marketplace, had been canceled. After that blow, Double Fine pivoted to smaller projects but was apparently struggling to stay afloat.

“It had been a long time since we had an experience where it felt like we were the winners,” Mr. Schafer says in the documentary of the moment in February 2012 when the company turned to Kickstarter.

A mere 24 hours later, instead of fighting for his studio’s life, Mr. Schafer found himself love-bombed by fans, who handed over more than $1 million in a single day. By the end of the fund-raising drive, Mr. Schafer and Double Fine had collected more than $3.3 million.

Two years later, the Broken Age is finally here — or at least the first half of it is. Although the project was financed by 87,000 people over the Internet, Broken Age doesn’t feel lo-fi. The art is lush and gorgeous, with the feel of an interactive children’s storybook. The voice cast includes Elijah Wood and, once again, Mr. Black. The writing is funny, tender and first rate.

Broken Age tells parallel coming-of-age stories, one about a boy named Shay who lives on a spaceship and the other about a girl named Vella from a small village. Each is trapped by circumstance and tradition, cloistered by a culture that thinks it knows their wants and needs better than they know themselves. The player can switch freely between the two stories, which otherwise unfold in a relatively linear fashion. Most of the puzzles, which involve trial-and-error clicking on objects, are simple and easily explained, although a few reduced me to guesswork.

Shay is doted on by an oppressively mothering computer, HAL 9000 crossed with June Cleaver, that calls him “Commander Sweetie” and force-feeds him nutrition paste and breakfast cereals with names like Soylent Dreams.

As Shay awakens to the reality of his insufferably cute prison, he fears that there is no escape. “Just once, I’d like to see a huge, flaming asteroid, hurtling in our direction,” he says at one point.

Vella’s life crisis is less existential. Her family has asked her to prepare for her “special day,” the Maidens Feast, which turns out to be an opportunity to be sacrificed to the sea monster Mog Chothra, a sort of floating brain covered with eyeballs and tentacles. Vella proposes that she and her fellow villagers fight the monster rather than offer up girls to be eaten by it — a suggestion that her relatives dismiss as a childish fantasy.

Naturally, she escapes, goes on a series of adventures, and her path crosses Shay’s in a cliffhanging climax that will leave players eager for the release of Broken Age’s second act.

The story of Broken Age mirrors the development process of the game, whose fans handed over money partly because they wanted to play but also surely because they wanted to participate in an experiment to change the way that video games are financed. It’s hard to believe that Mr. Schafer’s decision to create a video game about rejecting the well-trod path of one’s forebears isn’t intended as a metaphor for the reinvention of his studio and its liberation from the creative input of large video game publishers.