DualShock 4 support is coming to Steam 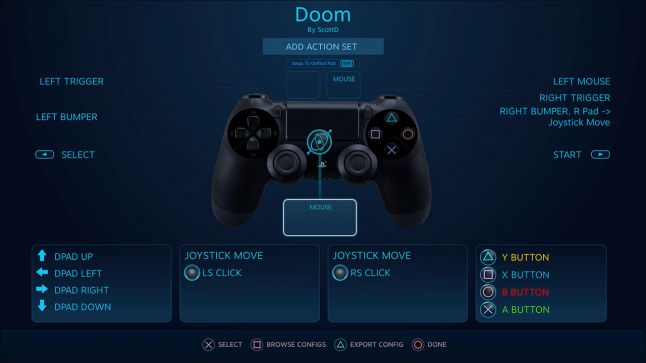 Valve’s annual, #developer-focused #conference, #SteamDevDays has brought to light a great deal of Linux support for VR. Now a Valve engineer, Jeff Bellinghausen announced that the company will release an update that adds DualShock 4 support to its Steam Controller configuration options. WHAT!?

Developer Lars Doucet, best known for Defender’s Quest, co-hosted the presentation with Bellinghausen, outlining that the DualShock 4 aka, the PS4 controller as having “a lot of overlapping functionality with the Steam Controller,” coming loaded with a gyro and touchpad. The current support for the DualShock 4 on PC “is a bit weak,” and this new new solution communicates directly with the controller to make integration “smooth”.

“Believe it or not, when you use the PS4 Controller through the Steam API, it’s exactly the same as a Steam Controller,” Doucet said. “You make the exact same API calls, you only get actions, not inputs, and the Steam API takes care of everything.”

The picture above outlines the PlayStation icons, with the button mapped to the ABXY buttons of the Xbox One and Steam Controllers. Which is interesting, but it is not likely that an icon switch will appear in-game unless directly modified by the developer themselves. Marking a rather significant change to the forefront of controller support on Steam. And yes, we are aware many Linux gamers prefer using the DualShock 4.

Steam Controllers still offer a number of customizable options, while many players use various custom configurations that you can download within the client for gaming. Some players prefer other options, such as what they are used to on console.
What’s even more interesting, the price of the stand alone DualShock 4 is about the same as the Steam Controller.

Doucet also stated that DualShock 4 support is coming first due to the functionality overlap, while other controllers are still planned to get the same Steam configuration options.

Why do we get the gnawing suspicion that PS4 integration is coming to Steam for Linux?