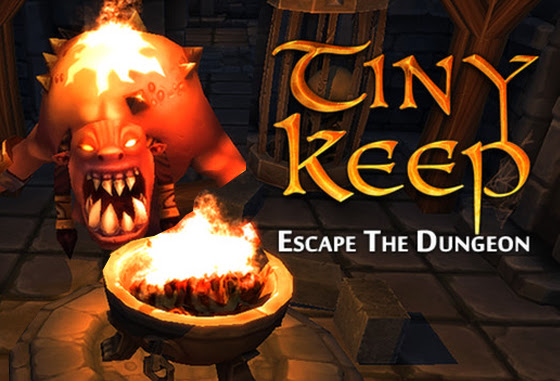 Do not let the cutesy eye catching hand-painted look of the characters and environments fool you. TinyKeep is a loving yet #harsh mistress. Prepare to have a blast being punctured, pummeled, impaled, #grinded and more over and over again. Are ye badass enough?

The highly anticipated action #roguelike TinyKeep is available today on Steam and other major digital distribution channels. TinyKeep brings intense creature filled, randomly generated dungeons, ruins and hellscapes to Windows PC with Linux and Mac versions coming after the initial launch. Which means the title actually works well under WINE, to the point we here at Linux Game News were rather impressed.

Gamers eager to be the first to try and fight their way through the hordes of clever beasties and ever-changing trap-filled twisting pathways will be able to pick up TinyKeep on Steam for $9.99 – a special discount of 33% off of the suggested retail price of $14.99 at launch. This celebratory discount will only run for a limited time.

Critics are already falling in love with TinyKeep saying:

“I have just played Phigames action/adventure game “TinyKeep”. And I have to say that I love the game so far. It´s like a cartoon version of Diablo and Dungeon Keeper (a mix of the two).”

The Gaming Ground
“TinyKeep is a game that will keep you panting all while pulling you in for “one last escape.”
Invision Game Community

Players will assume the role of a hopeless prisoner held deep in a forgotten dungeon – left to perish in the deepest, darkest cells of the keep. The nights pass by and all hope seems lost, you realize that the end is drawing near. But on one fateful day, you wake up and find yourself mysteriously free of your shackles, and in front of you lies a broken, unlocked door. There is only one thing left to do, you must now escape TinyKeep!

TinyKeep will be available for Windows PC at launch, September 29th, for 33% off of the suggested retail price of $14.99 on Steam and other major digital distribution channels.

Phigames is a small collaboration of passionate British individuals who just absolutely love making games. Lead by Phi Dinh, they were successfully financed in 2013 by the popular crowdfunding platform Kickstarter. Since then, Phi has been trying his utmost hardest to make his mark on the PC gaming scene. TinyKeep is the first story.