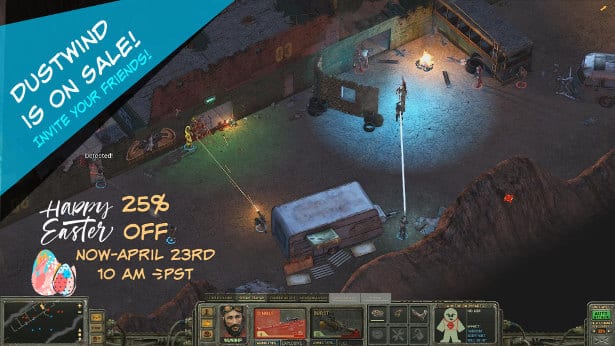 Dustwind is a real time tactical games on Sale and works on Linux via Proton. Developer Dustwind Studios is running that Sale on Steam. Holding a 76% review rating. But the games also still receiving development.


Dustwind takes place in a post apocalyptic world. Having been in Early Access since last November 2017. Launching their ‘Full Release’ via Steam in August 2018. The games still in development. Since we still do not have a Linux release. Just Proton.
But we news about the singleplayer campaign. Announcing the news on Steam regarding development plans.

“We are proud to announce that a Single Player Campaign mode has been in development and will be launching sometime this year, further details and updates will be mentioned when we near closer to an official launch period.”

The singleplayer campaign is something I’m looking forward too. Dustwind is a great game. The fact that players have selection of community built maps. Which also means you don’t have to play a static list. But hopefully we have a native release as well.

The whole point of Dustwind is to sneak. Then aim for body parts, using a various weapons and ammo. Since you can trick and flank your enemies. Disarm traps in this real time tactical game. Which works better depending on your character stats. Or drive and repair vehicles.
Take some caution to avoid blowing up all of your teammates. Seriously, don´t take that bazooka into close quarters combat. Which works well via Proton on Linux. Check out the basic combat tactics video below.

A typical game session in Dustwind is interesting. Guaranteed to generate some interesting situations. Since people are flying around with their limbs torn off. Usually after some dumb incident. Such as being kicked into a mine. So remember to shoot them at a distance. But also be careful when bouncing a grenade off a wall. Since it usually ends up back into your own face.
The same things goes for being shot by your minigun wielding friend. The one who was just trying to protect you from the raiders. The world of Dustwind is full of chaos. But it’s also fun. The way it goes down is blood and hilarious.

Also a typical game session is between 10 minutes and 1.5 hours. This also depends on which game mode and map you play. Large cooperative maps take longer. While competitive matches are usually timed at 10-20 minutes.

Dustwind tactical combat – The Making of