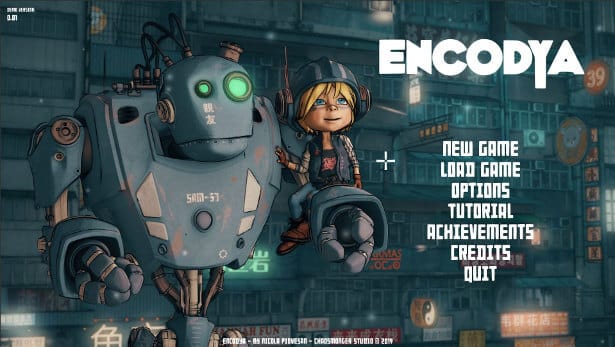 ENCODYAis point and click adventure games coming to Linux, Mac and Windows. Thanks to the sweetness and creativity of Studio Ghibli. Since the game takes place in a Blade Runner like world. But with the humour and game style of Monkey Island.

So those are the ingredients for ENCODYA. Since this is an indie point and click adventure game. Currently under development, taking place in a dystopian cyberpunk world.

ENCODYA is developed by Nicola Piovesan and Chaosmonger Studio. This is also their first big game project. Since they are an award winning film production company. Coming from the world of cinema and animation.
However, this also helps with a quality statement. Including the important elements that should identify a video game. Such as the story line, visual aesthetic, acting, music and sound immersion.

“Yes, the game will be available also for Linux.
We are developing it with Unity. And we’ll release it initially for Win, Mac, Linux.

If everything goes well. The demo should be available also for Linux.”

The adventure is inspired by a short film. One that is also created by the same company and director. The award winning “Robot Will Protect You”. The trailer of which you can see from this YouTube link. Below is some gameplay you might want to check out.

So here you can see the first gameplay video. Still incomplete and without voice acting. But the graphics are very comic book. While the setting and art work has a classic detail about it.

ENCODYA has the same main characters and setting. Since it’s 2062. Tina – a 9 years old orphan – lives with SAM-53 – her big clumsy robot guardian. Doing so on a rooftop makeshift shelter in Neo-Berlin. A dark megalopolis controlled by corporations. The protagonist is an urban jungle kid. Which knows how to live alone. While scavenging dumpsters of the dystopian city. Eking out a living of scraps.

While her funny robot is always with her. Programmed to protect the girl no matter what. One day the little girl discovers that her father left her a very important mission. Finish his plan and save the ENCODYA world from its greyness.
So now the two start an incredible adventure. Jumping into different realities. All full of bizarre robotic creatures and grotesque human beings. Through a lot of puzzles and exciting dialogues. They’ll find out the true meaning of being alive. All in the Blade Runner like setting. Which keeps a more playful vibe.

A free demo of ENCODYA is planned to release by end of May / early June 2019. While the full game is expected for late 2020. Coming to Steam on Linux, Mac and Windows.