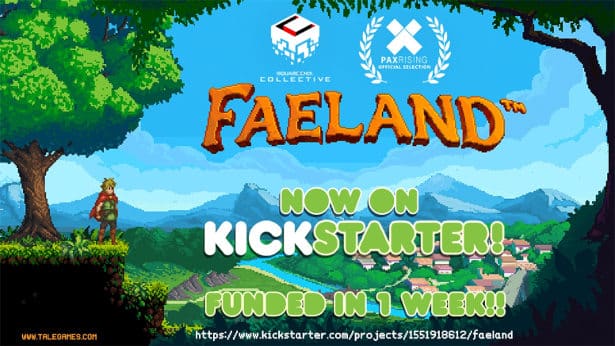 Faeland is a metroidvania action adventure RPG on Kickstarter for Linux, Mac and Windows. Taking inspiration from the nostalgia of 8-Bit classics. So the games created via pixel art

Since it is in development for Linux, Mac, Windows. The Kickstarter crowdfunding campaign is also funded, passing the $29,000 goal.

The second stretch goal has already passed and this includes a character creator. So now the Florida-based indie studio Talegames is gunning for the $40,000 USD mark. Which will unlock more Weapons plus a new weapon class, The Whip. This also seems familiar to games like Dead Cells to be honest.

Talegames is also getting help from the Square Enix Collective to help promote the title.

In Faeland, players can freely explore the open world. Travelling from one town to another interacting with friendly NPC’s. Delving into details about the game’s lore and gain useful tips. Also allowing players to sell value items to improve your economics. And of course buy new equipment and consumables for quests.

Some of the areas you explore are challenging forests, caves, dungeons, castles and more. Acquiring new abilities and special items to gain access to inaccessible areas. Since the combat style is unique to your equipped weapons. All with different attack animations, speeds, strengths and effects. Check out the Kickstarter trailer below.

In the fantasy world, humans have established their kingdom through centuries of peace. Since dark forces of magic and monstrous beasts lurk away from civilization. While Sam, our protagonist, is a hunter with his own skillset. Living in a secluded cottage in the forest, until his home gets raided by a horde of orcs and trolls.

Since only escaping the attack with his life. A new adventure begins, forging allegiances throughout his travels. While a much larger threat looms in the background. Forcing him to become the hero he was born to be.

Since the trailer gives a glimpse of Faeland. Some of the bosses seem to resemble that of La-Mulana. These are massive and challenging bosses. So there will be fails when in battle. At least until further understanding their behaviours.

The games music will play host to Shannon Mason and Jay Fernandes. Teaming up to tackle the soundtrack for Faeland. Since both have a long history of experience in the game industry.

So that’s that, Faeland is currently at coming in at $34,504 USD at the time of writing. The release will support Linux, Mac and Windows.

Since the crowdfunding campaign has another 19 days to go. Pledges also support Steam and GOG. So it’s worth checking out.