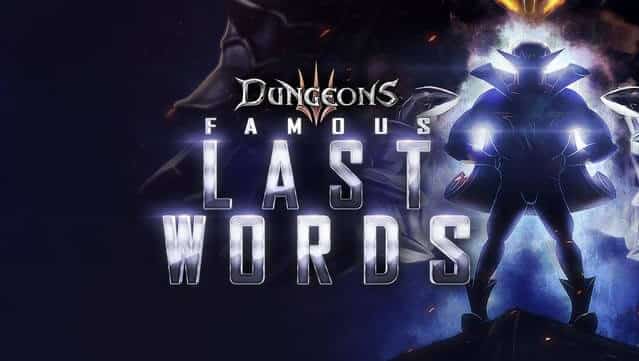 Famous Last Words is the final DLC for strategy hit Dungeons 3. Since it is release now on Linux, Mac and Windows PC.

In the new DLC, the Dungeon Lord finds itself bored. Since there is absolutely nothing Good left to conquer. With no paladins, queens or goddesses left to defeat. So what’s an overlord to do?
Just as the Bored to Death Evil thinks about hanging up his armour. Stealing the as yet unbeaten depths of its own nose in Famous Last Words. A heated discussion suddenly erupts. Doing so between the Absolute Evil’s trusted lieutenant Thalya. And believe it or not, the narrator!?
Who will be the victor? While the two prove themselves the ultimate warrior on the battlefield.

Famous Last Words features a new, fully voiced campaign. Taking place across three challenging new maps. Also a brand new boss character – the notorious Narrator. Who is backed up by a new creepy type, the dreaded Pen Pushers. Equipping their vicious, needle pointed writing implements. Both the Narrator and the Pen Pushers will also be available in skirmish missions. As well as the new campaign in Famous Last Words.

Dungeons 3 is the biggest, best and evil-est game in the series yet. Bringing all the humour and strategic depth of classic dungeon management sims. While a whole new modern audience. Including an extensive singleplayer campaign. As well as a two player co-op mode. And a fully re-worked overworld RTS mode.
Previous DLCs include Clash of Gods and Lord of the Kings. Also Evil of the Caribbean, Once Upon a Time and An Unexpected DLC.

Famous Last Words DLC is available now on Steam, GOG and Humble Store. Priced at $4.24 USD including the 15% discount until May 24th.