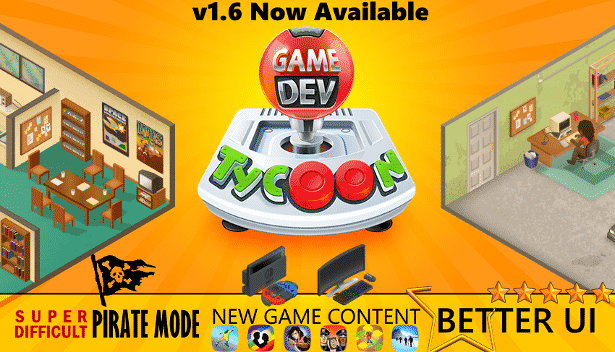 So this content update comes with changes based on the recent mobile release. Such as a challenging pirate mode inspired by Greenheart Games’s original piracy experiment. Also new topics, new platforms (including the Ninvento Swap and its bitter cartridges) and a few UI changes.
Greenheart Games detail everything included in a new blog post.

About Game Dev Tycoon
Game Dev Tycoon lets you build your game development empire. Since you might be a one-person team in your garage in the 80’s. Or all the way up to a major studio in the present day. Since you can relive the early days of game development. Building a world-class team and design best-selling games. Also research new technologies and make your mark on the games industry.

Game Dev Tycoon is an isometric business management game. Which also puts players in the shoes of an indie game developer. Starting from nothing in your garage. While you increase your skills and knowledge with practice and game reports. Building your studio reputation from the ground up. All while you manage your team.
Players will design best-selling games by creating your own game engines. Also by combining the best topics and genres. And choosing their platform and audience for each game. Since this ranges from small games to big publishing deals.

Game Dev Tycoon and the new gameplay mode is available on Linux, Mac and Windows. The release is on Steam and Humble Store, priced at $9.99 USD.