Home » Linux Gaming News » Gods Will Be Watching is set to release July 24 for Linux, Mac and Windows PC

Gods Will Be Watching is set to release July 24 for Linux, Mac and Windows PC 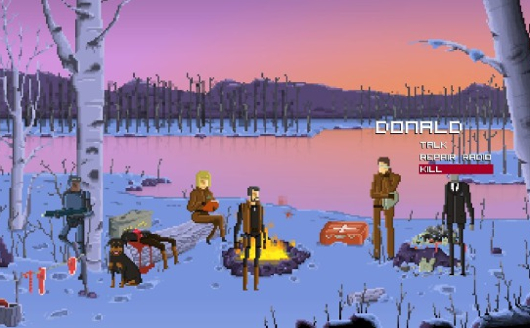 Gods Will Be Watching, the point-and-click #adventure of not happy things, will be available July 24 on PC, Mac, and Linux across many of your favourite digital distribution #platforms (Steam, GOG and Humble).

The game will be #available in a stress and panic versions, which are simply being named “standard” and “collector’s edition.” The standard edition includes… the game. The collector’s edition adds in the official soundtrack with 20 tracks, 50-page digital art book and 40-page comic book.

Valencia, Spain – Deconstructeam and Devolver Digital announce that upcoming indie thriller Gods Will Be Watching will arrive on July 24th for PC, Mac, and Linux via Steam, Humble, and GOG. The breakout debut game from the pensive minds at Deconstructeam is now available for pre-order through both a standard edition (£6.99) and a collector’s edition (£14.99) that includes the original soundtrack, a digital art book, and a digital comic that serves as the prologue to the haunting events of Gods Will Be Watching.

Gods Will Be Watching is a minimalistic “point and click thriller” centered on despair, commitment, and sacrifice as players face intriguing puzzles and tough decisions that will affect their entire crew’s wellbeing. Set against the backdrop of an interstellar struggle, Gods Will Be Watching follows Sgt. Burden and his crew in six tense chapters that examine a multitude of mature themes ranging from hostage situations and wilderness survival to biological weapon prevention and agonizing torture scenarios. Players are faced with incredibly difficult ethical and moral choices as their mental fortitude and personal limits are tested to their very limits. Each decision is crucial and players will need to choose between the lives of their team and the saving the world from genocide.

The Gods Will Be Watching Collector’s Edition includes:

Digital Art Book – 50-pages of concept art, digital paintings, and design illustrations from the production and development of Gods Will Be Watching.

Digital Comic Book – 40-page comic from Dayjob Studio that serves as a prologue to events of Gods Will Be Watching detailing the backstory of Sgt. Burden and Xenolifer.

Launch trailer released for Gods Will Be Watching for Linux, Mac and Windows PC