Linux Game News have been on a bit of a news kick with this recent issue arising from #22cans #development team.
If you remember back in 2012, #game designer Peter Molyneux took to Kickstarter to crowdfund Godus – a spiritual successor to one of his earlier games, Populous.

The Kickstarter of course succeeded, bringing in £526,563, which activated a number of stretch goals for the project, including a multiplayer mode and a Linux version. Backers also received various items and promises for backing, with the usual bigger rewards for more funding. 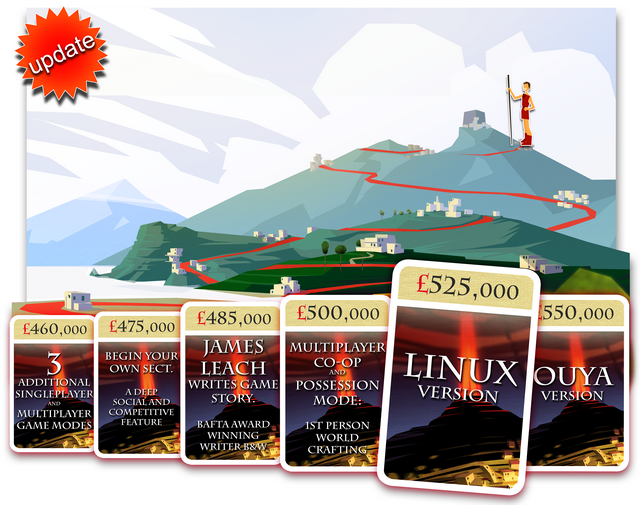 Rock Paper Shotgun recently brought the issue to attention, noting that the Linux version and art books had yet to be made and that a crucial feature of Godus has also yet to be implemented. The game engine used in development is Marmalade and does not support Linux natively.

Konrad Naszynski, 22Cans’ core designer, also went on record saying: “To be brutally candid and realistic I simply can’t see us delivering all the features promised on the Kickstarter page, a lot of the multiplayer stuff is looking seriously shaky right now especially the persistent stuff like hubworld.”

A video was then put together to address the issues. Molyneux, Naszynski and Jack Attridge sat to discuss the game’s problems, and in the video Molyneux said: “I apologise to everyone for the mistakes that I’ve made. You have been harsh and please continue to be harsh… I don’t want to stop doing Godus because of the mistakes that we’ve made, but I want to learn from them.”

Molyneux is the legendary developer responsible for God games like Populous, Black & White and Theme Park. Going on to lead Lionhead Studios and create RPG series Fable for Microsoft’s Xbox platform, but has since become better known for his promises, and his tendency to not fulfil them.

After departing Lionhead to start 22Cans and focus on smaller games, Molyneux announced their first title Curiosity. The premise was undoubtedly interesting – players around the world would join together in chipping away at an enormous cube until a secret at its centre was revealed to the single player who finished the process.

Molyneux called the prize at the cube’s centre “life-changingly amazing by any definition” but what it was related to Godus. The person who unearthed the prize (Bryan Henderson from Edinburgh) won a role in 22Cans’ next game and a share of the profits from it. That young man has seen nothing from the game and 22Cans stopped contacting him only a few months into Godus’ development. To cap everything off, Molyneux has already turned his attention to another game, The Trail. The veteran designer admitted recently that he would not do Kickstarter at the beginning of the development process again.

Fast-forward to 2015 and Godus is still on Steam Early Access. There are 4,275 reviews of the Early Access version and only 38 percent are positive. Key developers have left the Godus team and the game is now in the hands of designer Konrad Naszynski, who slowly worked his way onto the 22Cans team simply to fix Godus.

Godus was released on Steam Early Access in September 2013, and later on iOS and Android devices late last year.