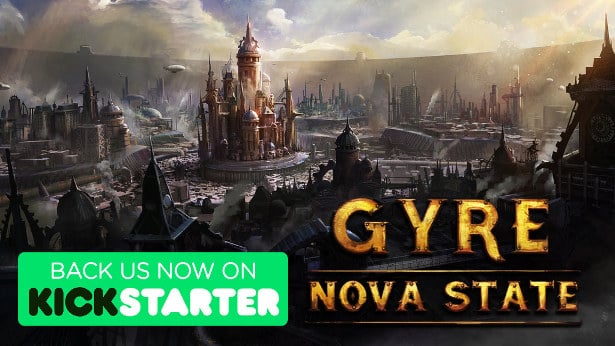 Gyre: Nova State is a steampunk RPG now on Kickstarter for Windows, yet Linux and Mac support could be incoming. So developer Evodant Interactive is revealing the next evolution in story generation. Since its upcoming RPG titled Gyre: Nova State. Launching a crowdfunding campaign on Kickstarter.

So the narrative generation technology contained in Evodant’s Toska Polynarrative Engine is interesting. Since this is the product of over a decade of R&D. Toska creates a dynamic, adaptive story in real-time. Since this is a unique, unscripted narrative for every player. It is an AI-based game master.

Since this has your attention. There is one key detail, what about Linux support?

“Digital Edition Download for PC:This is a Windows version of the game. While we would love to port the game to Linux and Mac, there is extensive effort to do that. We will be focusing on the Windows version to start.”

So this comes directly from the Kickstarter. It also puts Linux and Mac on the list, but not a full confirmation.

“I would actually love to move the entire dev stack to Linux but the team at the time didn’t have enough experience outside Windows/Mac.

We’re using Unreal Engine for development. Right now it’s punctuated by shader and driver issues. Not insurmountable but as a small team, we need to focus on a core product that’s playable first.”

So there you have it, some better news. Still, some may question Linux support not happening. Yet it seems the dev team have plans. Since the style of gameplay is very unique and cross-platform support would be a huge benefit.

Gyre: Nova State is a highly anticipated RPG as it revolutionizes the genre with non-linear, non-branching, unscripted story.

“For years, I kept seeing the same RPG systems and stories-on-rails in video games. The idea I had over a decade ago was to bring the open-ended story and play from table-top RPGs into the digital realm. It’s been a long road and I’m so excited that it’s finally coming alive,” says Dwayne Rudy, founder of Evodant. “With Toska’s unique hybrid cognitive model, I can’t wait to see how each individual player’s story evolves and the kinds of characters that get created.”

Ex-Bioware designer and producer, Rob Bartel, is on board helping guide the indie team at Evodant. Veteran art director Tom Zuber, accomplished audio lead Andrew Yankiwski, and creative director and inventor of Toska, Dwayne Rudy, round out the team leads.

Gyre: Nova State steampunk RPG will be running the crowdfunding campaign until Fri, April 20 2018 3:40 PM EDT. This means support for Windows, but hopefully Linux and Mac as well. We are waiting on a reply from Evodant Interactive.