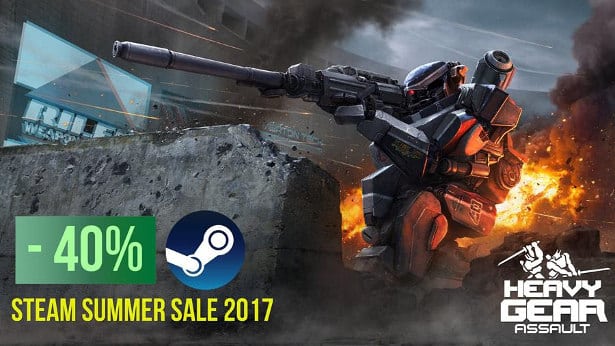 Heavy Gear Assault is back in the news again. Since the #games now seen yet another update and a nice discount. While the discount is only for the #SteamSummerSale. This makes it easier to put you in better control of a multi-ton, humanoid war machine (Gear). Which is available now for both Linux and #Windows. While is also available with a nice 40% discount until July 5th.
So jump into the peak of Terra Novan engineering. Gears feature a Rotary V-Engine, an advanced, compact and highly efficient internal combustion engine. Although built for faster speeds. Gears are gearing up with a Secondary Movement System (SMS). Set in the form of either wheels or treads under their feet. So get armor with new composites and load up with an assortment of weapons. Since Gears are advancing the most with the latest weapon systems available on Terra Nova.

The Heavy Gear Assault development team is very pleased to announce. Dream Pod 9 has renewed our Heavy Gear license until 2022. We are fully committed to the Heavy Gear universe and we are poised to continue bringing new features. As well as content online in a competitive multiplayer format following our Early Access development schedule. We have some very exciting announcements planned regarding our first Early Access eSports tournament so please stay tuned!

So I haven’t played Heavy Gear Assault lately. Actually, the games new changes have me keen to jump into some gameplay. While that 40% discount until July 5th for Linux and Windows works too.