Since the Heavy Gear Assault #release on Early Access, Linux gamers have been disappointed. However the game #developers are back with #updates and changes for Linux users. Hence the latest news seems to be focused directly on getting the Login issue sorted. Since many gamers were turned off playing the game for that very reason. Hence it didn’t help that we are one of the very few than can. Since our account at Linux Game Consortium works fine. Despite many receiving a free key for Heavy Gear Assault, this login issue is more apparent with new users. Which has not seen a major fix, until now.

So over a week ago, a forum post has been issued outlining the changes yet to come for Linux users:

First I’d like to let everyone that received a free key in a giveaway that they should all now be able to be activated in Steam and the game downloadable. If you experience any problems with the installation or authentication, we recommend that you take a look at the FAQ.

Right now, we are focusing a large effort into addressing a number issues with the Linux build of the game. It has come to our attention that many of our Linux players are running into various problems when attempting to play the game. Supporting Linux and the Linux community is one of our top concerns. We believe we should have most of the bugs addressed and will be pushing our next patch once we have had a chance to verify these fixes.

While a subsequent update was released this passed week. The development team are addressing the issue by releasing a new build in the Pre-release branch. Hoping to not only to get more community involvement, but introducing a working Prone feature. This will allow players to easily get into prone and then stand up. Which seems straight forward, right?

This update should resolve a number of issues for Linux users including those that received the following error upon attempting to login:

“LoginFailure: Login request failed, backend is unreachable or is malfunctioning”

Aside from the fixes for Linux, the HUD now provides feedback when equipping weapons making the system more intuitive to new players. Your Gear can also get up again from Prone by pressing the Prone key again — [Z] by default.

We would like to invite all of our players, especially those on Linux, to take this opportunity to test this update before it is in the main release branch of the game.

Switching between branches on Steam is easy: 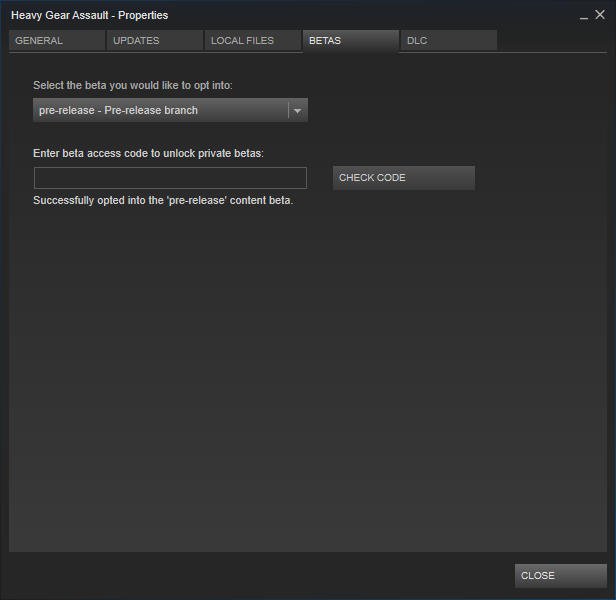 Right click on Heavy Gear Assault in your Steam library and pick ‘Properties’. Go to the ‘Betas’ tab and then select the ‘pre-release’ branch in the dropdown menu.

So all the goodness does not stop there. Hence more fixes such as “further compatibility with Linux and the Steam Controller” and “virtual mouse in Linux” have released. Check out the full Changelist available here.

“We have verified that this build should address most of the issues preventing some distributions of Linux from accessing the game.”

While being completely honest, I did not play a ton of Heavy Gear Assault. Mainly due to the vast majority of new Linux gamers unable to play. Most community members raged over the login failure problem. Since Heavy Gear Assault is a true update and flashback to the original Heavy Gear. One I have been looking forward to for some time.

Therefore, with all these updates and changes. Here’s hoping we can get ALL get into some gameplay now!!!

IF you are still having issues, add Heavy Gear Assault on Discord. The community manager Houruck can point you in the right direction.

Did the Pre-release build work? What is your gameplay experience so far on Linux?