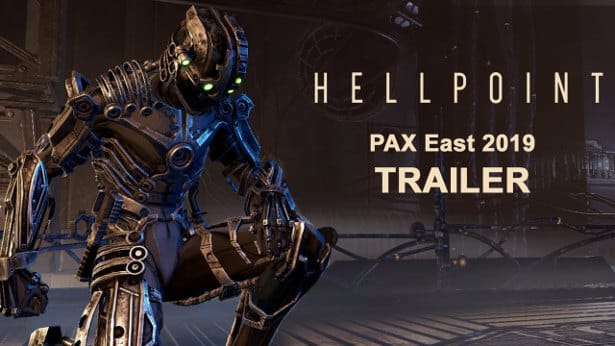 Hellpoint gets a new PAX East 2019 Trailer for Linux, Mac and Windows games. Thanks to Cradle Games who are eager to share. Since the games coming to Steam this year.

Hellpoint is a dark sci fi action RPG. While taking place in the aftermath of disaster. A massive quantum cataclysm.
So now, every living is quickly losing their mind. As their memories and bodies merge with alternate versions. Different version of themselves from parallel universes. The accident also attracted entities of immense power. Those that should also be left alone. Somewhere deep in the depth of other dimensions.

You play as a mysterious nameless character. One that somewhat resembles that of Warframe. And whose intentions follow your choices entirely. As you wake up in the derelict Irid Novo space station. In orbit around a super massive black hole.

The Hellpoint space station also orbits in real time. Revolving around the ominous black hole. Since its position directly impacts the sanity of the stations dwellers. The singularity is doing more than just distortion. Altering the fabric of space and time. All based on the time of the orbit. So that enemies in the levels get crazier. And also struck by fear. While unknown entities roam the corridors. Along with dozens of other mysterious events that can occur.

Hellpoint is coming later this year to Steam. Including support for Linux, Mac and Windows. And also on PS4, Xbox One plus Nintendo Switch. The games being showcased at PAX East. But the trailer definitely shows some potential. The games also available to Wishlist on Steam.

However, there is no release date yet. Since the games coming later in 2019. The same goes for price. Plus I’m hoping to learn more about the multiplayer and co-op features. So make sure to check back for more details.