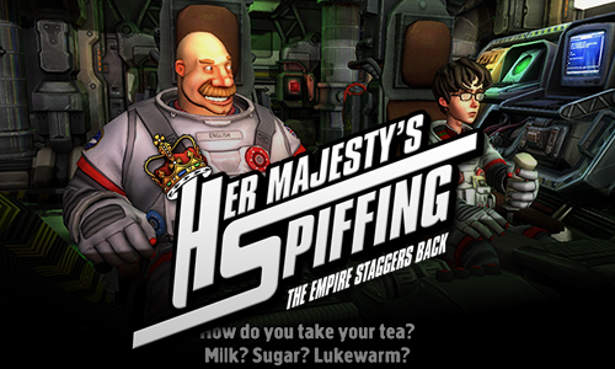 Spacefaring comedy adventure with a very British heart Her Majestys SPIFFING. Now on #Kickstarter for #Linux, Mac and Windows. A quaint point and click adventure game following the exploits of Captain Frank Lee English. And his trusted regional accented colleague, Aled. As they travel through the cosmos in search of new planets to claim for a galactic British Empire.

Again. Yeah, this is the game’s second appearance on the crowdfunding site. And this time developer Billy Goat Entertainment is looking for £30,000 in total.
This will go towards pushing the game’s three chapters out sooner rather than later, mostly.
It says nothing about the iOS version of the game on that Kickstarter page, mind. We asked Billy Goat about that and, rest assured, it’s still coming our way.

So, Her Majestys SPIFFING is a point-and-click adventure about Captain Frank Lee English and his Welsh colleague Aled.
The basis of their exploits is travelling across outer space. Therefore in search of planets for the galactic British Empire to claim.
It’s a comedy that touches on patriotism, British sensibilities, and colonialism. It also has touches of more absurd, light-hearted jokes and gags.

Anyone attenting Gamescom could get a hands-on with Her Majestys SPIFFING and come away with a few words. From what we hear, some of them were “funny”, “charming”, and “moustachioed”.
If that gets your feathers in a ruffle with interest. You can back it on Kickstarter – there’s a PC copy available at the £10 tier.

There’s also a Windows and Mac demo available if you have one of those systems you can run it on.

There are a few high profile stories of Kickstarter projects being successfully funding. Then taking longer to develop than initially anticipated. However, this is more often than not down to the campaign being a victim of it’s own success. Having been over funded to the point the developers decide they can deliver something EVEN better. We have a pretty solid design plan. And while we’re keen for backers to contribute ideas and opinions to the project regarding story/ puzzles etc. We don’t plan to tweak the game’s mechanics far beyond what we have planned for. This discipline should keep us on track. But this is an issue that we have to address. And in the unlikely circumstance that the game was delayed. It would be purely to ensure. That our game is every bit as good as we promised our backers it would be.