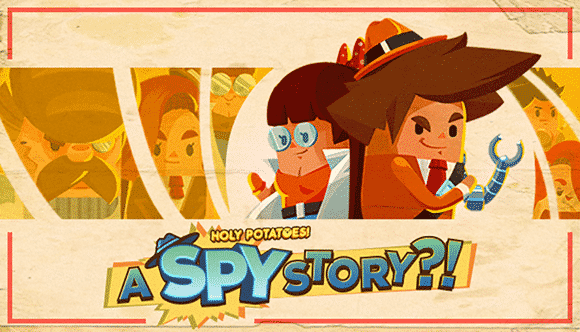 Holy Potatoes! A Spy Story casual simulation strategy release date for Linux, Mac and Windows. Since Daedalic Entertainment and Daylight Studios are happy to announce the fourth instalment of the Holy Potatoes! series. Coming to Steam and GOG on November 7th, 2018.


So in Holy Potatoes! A Spy Story, you are the mastermind. Taking care of your very own spudtastic spy headquarters! Together with twins Ren and Rexa, send your spies on missions. While uncovering the truth behind their parents’ disappearance and an evil spy corporation.
Therefore you have to use intelligence, strength, stealth and charm. While working to overcome various obstacles, outsmart security personnel. And also infiltrate enemy headquarters!

As you expand your team, recruit the cream of the crop. And encounter legendary pop-culture secret agents such as Jamal Bond, Zombra and Ezio de Frenzy. Conduct genetic splicing to transfer DNA to new spies. While setting up training stations, customize and upgrade your headquarters. Also build some crazy gadgets, vehicles and facilities. The embark on top-secret missions.

Infiltrate enemy headquarters and sabotage their evil plans. While using genetic splicing technology to recruit a legendary spies. And those pop-culture secret agents will also keep you laughing. All in your quest to uncover the larger truth in Holy Potatoes! A Spy Story.

Holy Potatoes! A Spy Story will release on November 7th for Linux, Mac and Windows. Also the wacky spy agency sim game will be available on Steam and GOG for $14.99 USD. No word on a launch week discount, but I expect Daedalic Entertainment will have a promotion.