Humble Day of the Devs 2016 Bundle is the new game bundle #available for Linux, Mac and Windows PC. This #bundle brings a solid $129 USD of great games, but gamers can pay what you want for Broken Age, Lumino City and Titan Souls. Only Broken Age is supported on Linux, Lumino City did have a native build but the developers pulled it from Steam and Titan Souls was supposed to also have a native build. 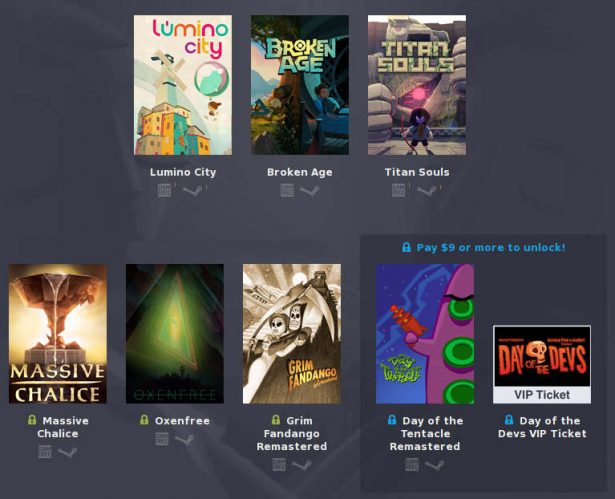 However, “Pay more than the average” which seems to be holding steady at $4.26 USD including Linux games, such as Oxenfree, Massive Chalice and Grim Fandango Remastered. Pay $9 USD or more and get Day of the Tentacle Remastered.

With the $9 or more option, gamers get a “Day of the Devs 2016” VIP ticket, that promises VIP early access at the San Francisco event on Saturday, November 5, 2016. Which will allow you to play all the games two hours before anyone else, including a line skip “fast pass” for anyone arriving at a later time, plus a 20% off discount at Pop-Up Shop and a 20% off coupon at iam8bit.com.

Humble Day of the Devs 2016 Bundle does comes with a 10% discount for Humble Monthly. That is if you are a new subscriber, available for all tiers.