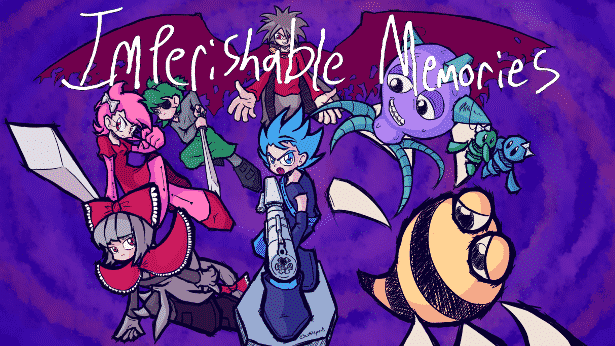 Imperishable Memories is a narrative-driven shoot em up for Linux, Mac and Windows. The game development uses Unity 3D. Combining bullet-hell gameplay with flashy cutscenes and angsty pondering no on Itch.


Imperishable Memories tells a story about coming to terms with horrible mistakes. While gaining the strength to move on, little by little.

After years of regret and inner turmoil. Roy decides to return to Atherus. A world bound by his memories and creative expressions. While he hopes to find answers. One of his most toxic creations is a stylish silver-haired being named Thanatos. Which has also taken over and integrated himself into the structure of Atherus.

So now that this brings about terrifying change to the world. Along the way, Roy will meet several of his old characters. Such as a flying tentacle monster, a depressed bee, and an angry pink-haired girl in a low-poly dress. All of them cold and desperate from years of isolation and mental anguish.

So players control Roy as you shoot oncoming enemies. Also collecting power-ups and dodging waves of bullets. But additionally you can pick up enemies and throw them at other enemies.
Also, if you hit multiple enemies at once with a single enemy. Players will reward you with tons of bonus points.
Imperishable Memories also features a disturbing blend of flat hand-drawn visuals with low-poly 3D models to make these dreamy nightmares come to life!

Shoot em up on Itch:

Imperishable Memories is now available on Itch for Linux, Mac and Windows. Which is a unique game that’s priced at only $8 USD.