Vancouver based independent game developer Over The Moon has recently reached its Kickstarter goal and will have its first game, The Fall, funded for development.

The base goal was reached just 6 days after an outpouring of support from the online gaming community. John Warner from Over The Moon has released the following statement:

“I’m absolutely overjoyed with the amount of support that the online gaming community has shown over the last week. I have a huge sense of gratitude for my backers; a lot of people have expressed excitement for the project and now I have the means to deliver.”

John has thus far developed The Fall by himself, taking significant risk to develop the project. It seems to have paid off.

“Indie game development is risky business; you’re never sure if there’s going to be a market for your game – if people feel the same way about it as you do. There are a lot of indies who have risked everything and failed, and I’ve been that person on earlier projects. This time, it turned out different. I can’t say enough how thankful I am.”

A fresh mix of genres – The Fall integrates point and click adventure games, platformers, and shooters into a very unique experience.  Drawing equal inspiration from games like Super Metroid and Monkey Island, humbly inspired by the greats that came before it.

A fresh narrative experience –  a story that focuses on “doing” rather than “watching”.  As players work their way through challenges, they organically find solutions that imply a larger narrative as the game progresses.

Episodic – designed from day one to be a manageable project, requiring relatively little in development costs, and able to sustain itself by providing players with reasonably sized, affordable episodes. This project will be finished on time!

Indie – Up until now, The Fall has been developed by one person: John Warner!  A long personal goal to have a sustainable career making fantastic, meaningful games as an indie developer. You can make that happen!

The Fall is a story about ARID, a virtual intelligence integrated into an armoured combat suit, who’s activated when the human pilot inside the suit is rendered unconscious. ARID awakes in a half-initialized state, with very little control over the suit and its functions. Somehow however, it must find a way to help its human pilot, even though it can barely help its self.
As players work their way through challenges, they organically find solutions that imply a larger narrative. Through exploring their environments, players will help ARID overcome its own self limitation, unfolding a unique story of self-actualization that’s driven by the player.

Gameplay in The Fall is a combination of exploration and combat. Most of the game has players exploring the world’s mysterious environments, picking up and using items, and solving puzzles in a more traditional adventure-gaming style.


Combat in The Fall is centred on a cover-based mechanic and is geared around timing, patience, and strategy. This level of interaction while using the player’s flashlight to explore and interact with the environment, creates a seamless blend between both aspects.

How to make a great game?

The importance of minimizing risk when planning a game development project. For that reason, the base goal for this project is the absolute minimum required to finish The Fall, Episode 1, to a higher level of quality. Here’s the basic breakdown of where the base amount is going: 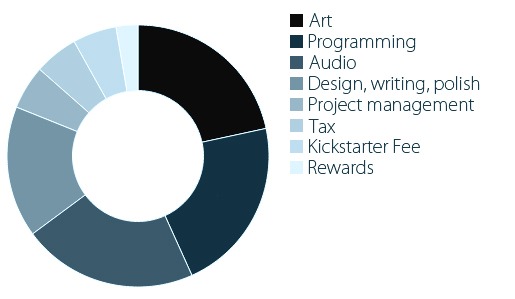 Getting The Fall on as many platforms as possible Over The Moon will be pushing hard to make that happen after the initial PC/MAC release. Linux support will come with an upgrade to the game engine, Unity3D. If that stretch goal is reached at $37,000, then Linux support will release at the same time as PC and Mac. Additional platforms will come after that, depending on the campaign reaching it’s stretch goals, or The Fall generating enough PC/Mac sales to pay for platform expansion. Thankfully, console manufacturers are making it easier than ever to launch on their systems, but there are some fees associated with using Unity on consoles. Again, here is where your support will directly help the outcome of the final release.

Indie game development in particular is all about managing risks, because planning and finishing a project on an indie budget is inherently a risky endeavour. For this reason, indies who survive have to learn how to make realistic project plans with safe development schedules. In The Fall‘s case, John Warner made sure to Iron out the major challenges before creating this Kickstarter page.

The Fall, Episode One has:

– No dependencies — Up until now, John Warner has been the sole developer with all the hardware, software, and ability to finish this project.
– A clear plan — The first episode has been precisely planned out to avoid the possibility of running into creative blocks during development.
– A proven pipeline — The art style was designed to make producing content simple, and has been proven to do so.
– A proven design pipeline — The “back end” of the game has been almost fully written. The only thing left is to produce content.
– Established support – Over The Moon have gotten their hands on a great sound designer! Who is also responsible for the audio on promotional videos and will begin working together on The Fall when the campaign is successful. A voice actress for the main character has been obtained as well.

In other words, every major development risk has been mitigated at the time of this writing.

Check out The Fall on Kickstarter