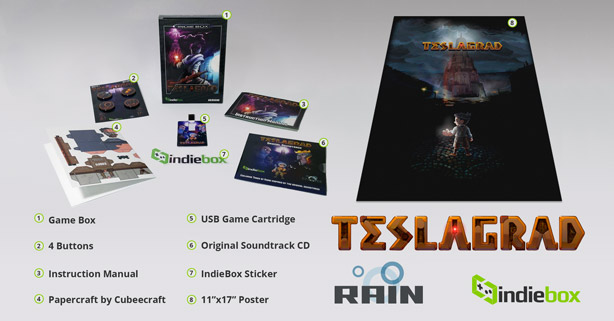 Orlando-based PC game #subscription service IndieBox has launched its first #boxed product in an effort to fight the “race to the bottom” syndrome that often sinks indie game pricing.

Why is this important?

Every game we ship is Windows, Mac, and Linux compatible. You own your game — it’s DRM-free!

Customers who subscribe to IndieBox (starting at $14.99 monthly, plus shipping), will receive a deluxe-edition, boxed indie game for Windows, Mac, and Linux in the mail every month that includes an array of bonus items like buttons, stickers, and soundtrack CDs. The service’s debut game Teslagrad recently shipped out to subscribers in a Sega Genesis-styled box and USB cartridge casing.

Featured games are not disclosed until monthly products hit subscriber mailboxes, and five additional games are planned for shipment in the coming months. Next month’s boxed product, due to ship on June 20, is available for pre-order through May 31.