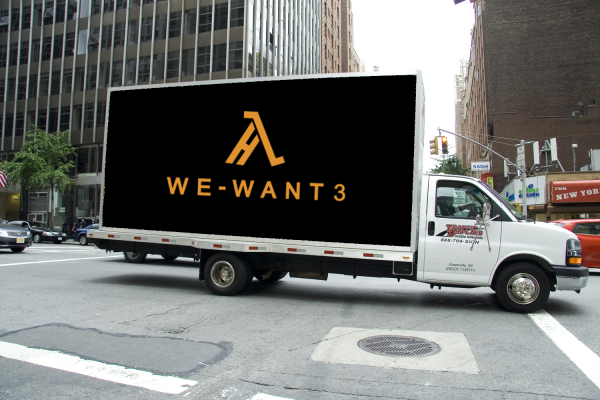 Half-Life 3 has #reportedly been in development for ages now. Having never been officially #confirmed, fans have never really shut up about how they want Valve to #release it. But somehow we are at a point where all those forum posts, Reddit threads, screaming on Steam, all pale in comparison to today’s campaign.

The elaborate Indiegogo campaign is started by Chris Salem and Kyle Mazzei, who work for marketing firm McKee Wallwork & Co., and claim the firm is supporting them in their endeavour.

Being an Indiegogo campaign, Chris and Kyle get to keep whatever money it makes. There are four tiers to this thing, and I am going to list them all because they are completely ridiculous.

$3,000 tier: The duo will start a Google AdWord campaign that targets all 300 employees of Valve, all saying “we want Half-Life 3″.

$9,000 tier: A truck with a giant billboard will “besiege” Valve HQ in Washington and show similar messages.

$45,000 tier: This is the most ridiculous one of them. The pair will hire Gabe Newell look-a-likes to also “besiege” Valve’s HQ, all wearing “we want Half-Life 3″ t-shirts.

$150,000 tier: And finally, the most extravagant one; a concert will be held in Seattle featuring “some of the biggest names in video game music” and invite Valve employees and fans.

According to Kotaku, the campaign’s goal is to “engulf Valve employees’ lives”. I can’t seem to find that anywhere on the campaign page, so it must’ve been removed.

You may think this is borderline harassment, and you will be 100% correct. It’s one thing to be a fan of something and clamour for a sequel, and it’s another thing entirely to raise money so you can better harass developers to make said sequel. Newsflash everyone; Valve doesn’t owe you anything.