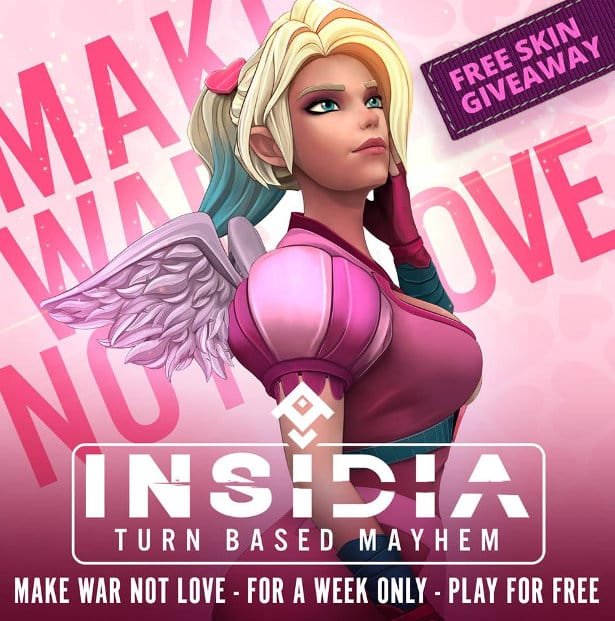 So turn-based tactics and furious multiplayer mayhem await in INSIDIA. Which is the new online strategy game where two players battle it out. While each trying gain riches of a post-apocalyptic fantasy world.

Bad Seed an Italian indie developer with four years of experience. They are responsible for developing innovative and high-quality games, So now, having survived Valentine’s Day. And also introducing the lovely and deadly Champion Coma the Shadeslinger. All for INSIDIA, this free to play, turn-based online strategy game. Which just happens to be available for Linux, Mac and Windows.

Will this event be about love? Nope! In the world of INSIDIA, the degenerates of the wasteland celebrate war on this day instead. Survive Valentine’s Day and unlock the exclusive Heartbreaker skin for Coma in a special week-long pre-launch event! INSIDIA is currently available on Steam Early Access. Which will officially launch on February 27, 2018.

Quick and deadly, new Champion Coma can dish out powerful chained attacks at medium range. However, to sustain her damage output, the Shadeslinger must carefully choose when to reload her gun, to avoid being caught with an empty barrel.

Coma the Shadeslinger abilities include:

Thanks to its competitive nature and incredibly fun to watch gameplay. INSIDIA aspires to become a competitive esport game. It has been selected to be the first indie game of its kind featured on FACEIT. The leading platform for online competitions, with nearly 10 million members.
While joining such titles as Counter-Strike: Global Offensive, DOTA 2, Overwatch and more on the platform. INSIDIA‘s integration with FACEIT from launch allows players to easily take part in tournaments, leagues, ladders, hubs and more.

INSIDIA is available now to play for free on Steam. The games release also supports Linux, Mac and Windows.